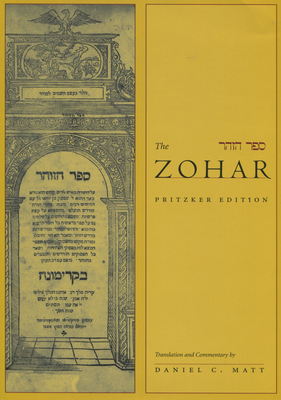 This is book number 3 in the Zohar: Pritzker Edition series.

This third volume of The Zohar: Pritzker Edition completes the Zohar's commentary on the book of Genesis. Here we find spiritual explorations of numerous biblical narratives, including Jacob's wrestling with the angel, Joseph's kidnapping by his brothers, his near seduction by Potiphar's wife, his interpretation of Pharaoh's dreams, and his reunion with his brothers and father.

Throughout, the Zohar probes the biblical text and seeks deeper meaning--for example, the divine intention behind Joseph's disappearance, or the profound significance of human sexuality. Divine and human realities intertwine, affecting one another.

Toward the end of Genesis, the Bible states: Jacob's days drew near to die--an idiomatic expression that the Zohar insists on reading hyperliterally. Each human being is challenged to live his days virtuously. If he does, those days themselves are woven into a garment of splendor; at death, they "draw near," enveloping him, escorting him to the beyond.

Sefer ha-Zohar (The Book of Radiance) has amazed and overwhelmed readers ever since it emerged mysteriously in medieval Spain toward the end of the thirteenth century. Written in a unique Aramaic, this masterpiece of Kabbalah exceeds the dimensions of a normal book; it is virtually a body of literature, comprising over twenty discrete sections. The bulk of the Zohar consists of a running commentary on the Torah, from Genesis through Deuteronomy.

Daniel C. Matt is a leading authority on Jewish mysticism. For over twenty years, he served as Professor of Jewish Spirituality at the Graduate Theological Union in Berkeley, California. He has also taught at Stanford University and the Hebrew University of Jerusalem. He has published six books, including The Essential Kabbalah; Zohar: The Book of Enlightenment; Zohar: Annotated and Explained; and God and the Big Bang: Discovering Harmony between Science and Spirituality. Matt is also the translator of The Zohar: Pritzker Edition, Volume One, winner of the National Jewish Book Award, and The Zohar: Pritzker Edition, Volume Two, winner, along with Volume One, of the Koret Jewish Book Award. He spent the years 1998-2002 in Jerusalem working on this translation and currently lives in Berkeley, Californi

"Daniel Matt's translation of the Zohar is a masterful approach to one of the most enchanting and intriguing texts of religious literature. . . . This new volume will be read and reread with delight and fervor by teachers and students alike."—Elie Wiesel

"An epochal event. . . . This work of learning will free us from the errors and misrepresentations that have long existed in almost all the popular accounts of the Zohar. We shall have this text in which the Zohar appears in all of its spiritual depth."—Rabbi Arthur Hertzberg

"Daniel C. Matt is giving us what I hardly thought possible: a superbly fashioned translation and commentary that opens up the Zohar to the English-speaking world. . . . The lucidity and overwhelming relevance of Matt's Zohar . . . will provide both common and uncommon readers with access to a work capable of changing the consciousness of those who enter it."—Harold Bloom, Yale University