The Ottoman Scramble for Africa: Empire and Diplomacy in the Sahara and the Hijaz (Hardcover) 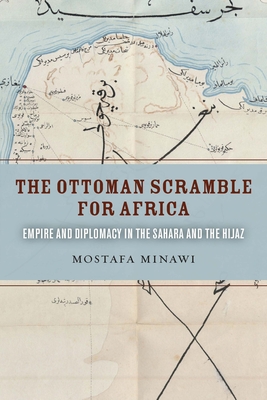 The Ottoman Scramble for Africa is the first book to tell the story of the Ottoman Empire's expansionist efforts during the age of high imperialism. Following key representatives of the sultan on their travels across Europe, Africa, and Arabia at the close of the nineteenth century, it takes the reader from Istanbul to Berlin, from Benghazi to Lake Chad Basin to the Hijaz, and then back to Istanbul. It turns the spotlight on the Ottoman Empire's expansionist strategies in Africa and its increasingly vulnerable African and Arabian frontiers.

Drawing on previously untapped Ottoman archival evidence, Mostafa Minawi examines how the Ottoman participation in the Conference of Berlin and involvement in an aggressive competition for colonial possessions in Africa were part of a self-reimagining of this once powerful global empire. In so doing, Minawi redefines the parameters of agency in late-nineteenth-century colonialism to include the Ottoman Empire and turns the typical framework of a European colonizer and a non-European colonized on its head. Most importantly, Minawi offers a radical revision of nineteenth-century Middle East history by providing a counternarrative to the Sick Man of Europe trope, challenging the idea that the Ottomans were passive observers of the great European powers' negotiations over solutions to the so-called Eastern Question.

Mostafa Minawi is Assistant Professor of History at Cornell University.