To Save the Children of Korea: The Cold War Origins of International Adoption (Asian America) (Paperback) 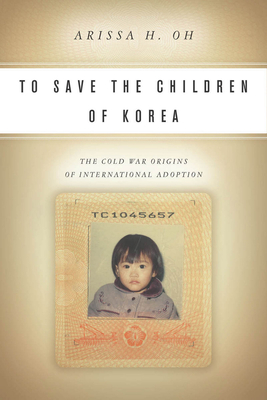 To Save the Children of Korea is the first book about the origins and history of international adoption. Although it has become a commonplace practice in the United States, we know very little about how or why it began, or how or why it developed into the practice that we see today.

Arissa Oh argues that international adoption began in the aftermath of the Korean War. First established as an emergency measure through which to evacuate mixed-race GI babies, it became a mechanism through which the Korean government exported its unwanted children: the poor, the disabled, or those lacking Korean fathers. Focusing on the legal, social, and political systems at work, this book shows how the growth of Korean adoption from the 1950s to the 1980s occurred within the context of the neocolonial U.S.-Korea relationship, and was facilitated by crucial congruencies in American and Korean racial thought, government policies, and nationalisms. It also argues that the international adoption industry played an important but unappreciated part in the so-called Korean economic miracle.

Arissa H. Oh is Assistant Professor in the Department of History at Boston College.