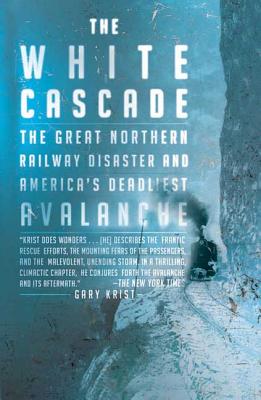 "Krist does wonders . . . [He] describes the frantic rescue efforts . . . and the malevolent, unending storm. In a thrilling, climactic chapter, he conjures forth the avalanche."—The New York Times

In February 1910, a monstrous, record-breaking blizzard hit the Northwest. Nowhere was the danger more terrifying than near a tiny town called Wellington, perched high in the Cascade Mountains, where a desperate situation evolved: two trainloads of cold, hungry passengers and their crews found themselves marooned. For days, an army of the Great Northern Railroad's most dedicated men worked to rescue the trains, but just when escape seemed possible, the unthinkable occurred—a colossal avalanche tumbled down, sweeping the trains over the steep slope and down the mountainside. Centered on the astonishing spectacle of our nation's deadliest avalanche, The White Cascade is the masterfully told story of a never-before-documented tragedy.

Gary Krist is the prizewinning author of the novels Bad Chemistry, Chaos Theory, and Extravagance, and of the short-story collections, The Garden State and Bone by Bone. His stories, articles, and travel pieces have been featured in noteworthy magazines, including National Geographic Traveler, GQ, and Esquire. He lives in Bethesda, Maryland, with his wife and daughter.

“What a wild-eyed, horrific, brilliantly written story Gary Krist tells in The White Cascade. You almost feel like you're a Great Northern Railway passenger in 1910, coping with the blizzard-from-hell. Jack London would be proud of this riveting nonfiction accomplishment.” —Douglas Brinkley, Professor of History at Tulane University and author of The Great Deluge: Hurricane Katrina, New Orleans, and the Mississippi Gulf Coast

“The White Cascade brilliantly recreates one of those terrifying moments when human ingenuity runs up against the fierce power of nature. Gary Krist doesn't simply describe the Great Northern Railway Disaster. He takes you up the mountainside, settles you into the trapped Pullman car, and makes you feel the fear closing in around you. That's storytelling at its finest.” —Kevin Boyle, author of Arc of Justice: A Saga of Race, Civil Rights, and Murder in the Jazz Age

“It is always a great gift when someone tells a long forgotten story, but it is especially so when the drama is this astonishing, and the writer this talented. Gary Krist weaves a spider web of a tale, drawing the reader in, until they feel as though they too are a passenger on Seattle 25, trapped in one of the world's most dangerous places, in one of history's most savage storms. The White Cascade will keep you up at night, and not just from its unsettling end--you won't be able to put it down.” —Susan Casey, author of The Devil's Teeth