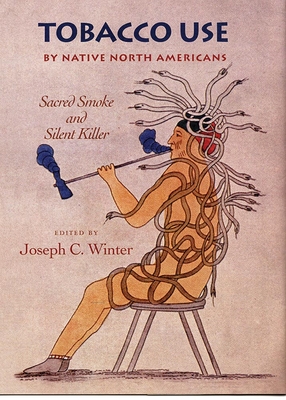 By Joseph C. Winter
This item is not available.

Recently identified as a killer, tobacco has been the focus of health warnings, lawsuits, and political controversy. Yet many Native Americans continue to view tobacco-when used properly-as a life-affirming and sacramental substance that plays a significant role in Native creation myths and religious ceremonies.

This definitive work presents the origins, history, and contemporary use (and misuse) of tobacco by Native Americans. It describes wild and domesticated tobacco species and how their cultivation and use may have led to the domestication of corn, potatoes, beans, and other food plants. It also analyzes many North American Indian practices and beliefs, including the concept that Tobacco is so powerful and sacred that the spirits themselves are addicted to it. The book presents medical data revealing the increasing rates of commercial tobacco use by Native youth and the rising rates of death among Native American elders from lung cancer, heart disease, and other tobacco-related illnesses. Finally, this volume argues for the preservation of traditional tobacco use in a limited, sacramental manner while criticizing the use of commercial tobacco.