Smoke Over Oklahoma: The Railroad Photographs of Preston George (Hardcover) 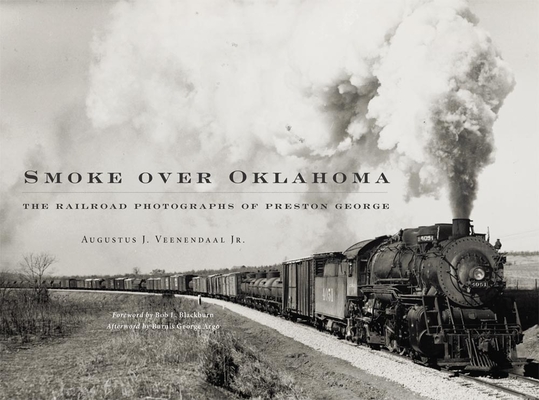 
Oklahoma was in the throes of the Great Depression when Preston George acquired a cheap Kodak folding camera and took his first photographs of steam locomotives. As depression gave way to world war, George kept taking pictures, now with a Graflex camera that could capture moving trains. In this first book devoted solely to George's work, his black-and-white photographs constitute a striking visual documentary of steam-driven railroading in its brief but glorious heyday in the American Southwest. The pictures also form a remarkable artistic accomplishment in their own right. Prominent among the magnificent action images collected here are the engines that were George's passion--steam locomotives pulling long freights or strings of gleaming passenger cars through open country. But along with the fireworks of the heavier steam engines slogging through the mountains near the Arkansas border on the Kansas City Southern or climbing Raton Pass in New Mexico on the Santa Fe, George's photographs also record humbler fare, such as the short trains of the Frisco and Katy piloted by ancient light steamers, and the final years of that state's interurban lines. Augustus J. Veenendaal Jr.'s brief history of railroads in the Sooner State puts these images into perspective, as does a reminiscence by George's daughter Burnis on his life and his pursuit of railroad photography. With over 150 images and a wealth of historical and biographical information, this volume makes accessible to an audience beyond the most avid railfans the extent of Preston George's extraordinary achievement.