In the Midst of Radicalism: Mexican American Moderates during the Chicano Movement, 1960-1978 (Paperback) 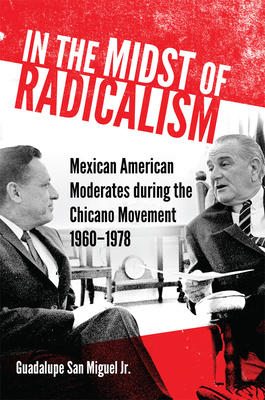 By Guadalupe San Miguel
This item is not available.

The Chicano Movement of the 1960s and '70s, like so much of the period's politics, is best known for its radicalism: militancy, distrust of mainstream institutions, demands for rapid change. Less understood, yet no less significant in its aims, actions, and impact, was the movement's moderate elements. In the Midst of Radicalism presents the first full account of these more mainstream liberal activists-those who rejected the politics of protest and worked within the system to promote social change for the Mexican American community.

The radicalism of the Chicano Movement marked a sharp break from the previous generation of Mexican Americans. Even so, historian Guadalupe San Miguel Jr. contends, the first-generation agenda of moderate social change persisted. His book reveals how, even in the ferment of the '60s and '70s, Mexican American moderates used conventional methods to expand access to education, electoral politics, jobs, and mainstream institutions. Believing in the existing social structure, though not the status quo, they fought in the courts, at school board meetings, as lobbyists and advocates, and at the ballot box. They did not mount demonstrations, but in their own deliberate way, they chipped away at the barriers to their communities' social acceptance and economic mobility. Were these men and women pawns of mainstream political leaders, or were they true to the Mexican American community, representing its diverse interests as part of the establishment? San Miguel explores how they contributed to the struggle for social justice and equality during the years of radical activism. His book assesses their impact and how it fit within the historic struggle for civil rights waged by others since the early 1900s.

In the Midst of Radicalism for the first time shows us these moderate Mexican American activists as they were, playing a critical role in the Chicano Movement while maintaining a long-standing tradition of pursuing social justice for their community.