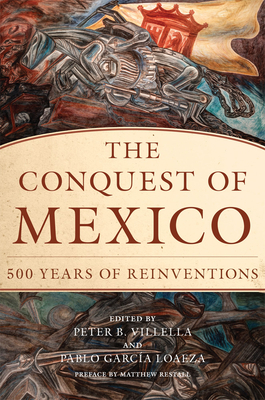 By Peter B. Villella (Editor), Pablo García Loaeza (Editor), Matthew Restall (Preface by)
This item is not available.

The Spanish invasion of Mexico in 1519, which led to the end of the Aztec Empire, was one of the most influential events in the history of the modern Atlantic world. But equally consequential, as this volume makes clear, were the ways the Conquest was portrayed. In essays spanning five centuries and three continents, The Conquest of Mexico: 500 Years of Reinventions explores how politicians, writers, artists, activists, and others have strategically reimagined the Conquest to influence and manipulate perceptions within a wide variety of controversies and debates, including those touching on indigeneity, nationalism, imperialism, modernity, and multiculturalism. Writing from a range of perspectives and disciplines, the authors demonstrate that the Conquest of Mexico, whose significance has ever been marked by fundamental ambiguity, has consistently influenced how people across the modern Atlantic world conceptualize themselves and their societies. After considering the looming, ubiquitous role of the Conquest in Mexican thought and discourse since the sixteenth century, the contributors go farther afield to examine the symbolic relevance of the Conquest in contexts as diverse as Tudor England, Bourbon France, postimperial Spain, modern Latin America, and even contemporary Hollywood. Highlighting the extent to which the Spanish-Aztec conflict inspired historical reimaginings, these essays reveal how the Conquest became such an iconic event--and a perennial medium by which both Europe and the Americas have, for centuries, endeavored to understand themselves as well as their relationship to others. A valuable contribution to ongoing efforts to demythologize and properly memorialize the Spanish-Aztec War of 1519-21, this volume also aptly illustrates how we make history of the past and how that history-making shapes our present--and possibly our future.