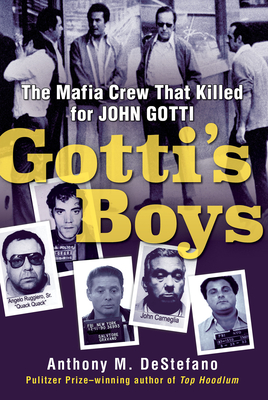 Meet the men who murdered for the mob—and made John Gotti the most powerful and deadly crime boss in America . . .

They called him the “Teflon Don.” But in his short reign as the head of the Gambino crime family, John Gotti wracked up a lifetime of charges from gambling, extortion, and tax evasion to racketeering, conspiracy, and five convictions of murder. He didn’t do it alone. Surrounding himself with a rogues gallery of contract killers, fixers, and enforcers, he built one of the richest, most powerful crime empires in modern history. Who were these men? Pulitzer Prize-winning journalist Anthony M. DeStefano takes you inside Gotti’s inner circle to reveal the dark hearts and violent deeds of the most remorseless and cold-blooded characters in organized crime. Men so vicious even the other Mafia families were terrified of them. Meet Gotti’s Boys . . .

* Charles Carneglia: the ruthless junkyard dog who allegedly disposed of bodies for the mob—by dissolving them in acid then displaying their jewels.

* Gene Gotti: the younger Gotti brother who ran a multimillion-dollar drug smuggling ring—enraging his bosses in the Gambino family.

* Angelo “Quack-Quack” Ruggiero: the loose-lipped contract killer who was wire-tapped by the FBI—and dared to insult Gotti behind his back.

* Tony “Roach” Rampino: the hardcore stoner who looked like a cockroach—and used his gangly arms and horror-mask face to frighten his enemies.

Rounding out this nefarious group were the likes of Frank DeCicco, Vincent Artuso, and Joe “The German” Watts, a man who wasn’t a Mafiosi but had all of the power and prestige of one in John Gotti’s slaughterhouse crew. Gotti’s Boys is a killer line-up of the crime-hardened mob soldiers who killed at their ruthless leader’s merciless bidding—brought to vivid life by the prize-winning chronicler of the American mob.

Pulitzer Prize-winning journalist Anthony M. DeStefano has covered organized crime for over three decades, including the crime beat for New York Newsday for the past twenty years. His books on organized crime include Gangland New York, King of the Godfathers, Mob Killer, The Big Heist, and Top Hoodlum: Frank Costello, Prime Minister of the Mafia.

“In this solid true crime account, Pulitzer Prize-winning journalist DeStefano explores the inner machinations of the New York Mob and John Gotti’s rise to the head of the Gambino family…DeStefano does a fine job capturing the essence of New York…Aficionados are sure to relish the finer, exhaustively researched details.”
—Publishers Weekly