Without a Map: A Memoir (Hardcover) 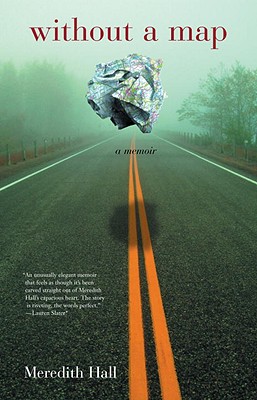 Meredith Hall's moving but unsentimental memoir begins in 1965, when she becomes pregnant at sixteen. Shunned by her insular New Hampshire community, she is then kicked out of the house by her mother. Her father and stepmother reluctantly take her in, hiding her before they finally banish her altogether. After giving her baby up for adoption, Hall wanders recklessly through the Middle East, where she survives by selling her possessions and finally her blood. She returns to New England and stitches together a life that encircles her silenced and invisible grief. When he is twenty-one, her lost son finds her. Hall learns that he grew up in gritty poverty with an abusive father—in her own father's hometown. Their reunion is tender, turbulent, and ultimately redemptive. Hall's parents never ask for her forgiveness, yet as they age, she offers them her love. What sets Without a Map apart is the way in which loss and betrayal evolve into compassion, and compassion into wisdom.

Meredith Hall's long journey from an inexcusably betrayed girlhood to the bittersweet mercies of womanhood is a triple triumph—of survival; of narration; and of forgiveness. Without a Map is a masterpiece.
—David James Duncan, author of The Brothers K and God Laughs and Plays

"Heartbreaking, uplifting, and luminous, Without a Map contains some of the most lyrical and evocative prose I have I ever read. Meredith Hall's story of loss, shame, and betrayal is also a story of joy, reconnection, and survival; each memory takes us deep to the marrow of sorrow and celebration. " —Kim Barnes, author of In the Wilderness: Coming of Age in Unknown Country

Winner of the Elle nonfiction readers’ pick for the month of April:
"In this stark, stunning, and devastating account of being shunned by her family and New England community after giving birth out of wedlock in the ’60s, Hall writes about what was and what might have been. Particularly moving is her haunting description of wandering in Europe and the Middle East, ultimately shoeless, penniless, and utterly alone. Refreshingly, she tells about life via a collection of beautifully rendered sketches instead of a linear narrative."—Sheila McClear, NYC

"Meredith Hall is like a geiger counter ticking along the radium edge of these recent decades. She gives us self as expert witness—Without a Map is smart, sharp, and redemptively honest." —Sven Birkerts, author of The Gutenberg Elegies and My Sky Blue Trades

"Meredith Hall boldly charts one of the bravest of stories, the journey from disrupted youth up through that most tricky and forbidding territory, the family circle. Bone-honest and strong in its every line, this work of memory is a remarkably deep retrieval of its times and souls, thereby reflecting our own."—Ivan Doig, author of Heart Earth

"Without A Map tells an important and perceptive story about loss, about aloneness and isolation in a time of great need, about a life slowly coming back into focus and the calm that finally emerges. Meredith Hall is a brave new writer who earns our attention."—Annie Dillard, author of For the Time Being

"An unusually elegant memoir that feels as though its been carved straight out of Meredith Hall’s capacious heart. The story is riveting, the words perfect. It is rare to read a work that manages to be at once artful and compelling, which for me best describes Meredith Hall’s debut work. Few people write like this. Fewer still have the courage to live like this—without the comfort of any cliché."—Lauren Slater, author of Opening Skinner's Box, Prozac Diary, and Welcome to My Country

"Meredith Hall's magnificent book held me in its thrall from the moment I began reading the opening pages. It is a moving example of a difficult life redeemed first through examination, then reflection, then finally it turns—like a rough stone polished until it gleams—into a genuine work of art."—Dani Shapiro, author of Family History

"Open adoptions and connections between birth mothers and their children were not the way of life for a young girl who got pregnant in the '60s. Meredith Hall, in her beautifully written, poignant memoir, tells us what life was like for a naive girl who found herself pregnant and abandoned by her mother and father. This is a tale of loss, of endless traveling in search of an intangible something, and, ultimately, of forgiveness."—Gayle Shanks, Changing Hands Bookstore, Tempe, AZ

"Appalling and infuriating, yet uplifting and inspiring, Without A Map pulls you into Hall’s personal experience of sudden rejection and expulsion from her only sources of sustenance and connection. As an adoptive parent I cried and cheered for her through her exile and return to a very different home. Meredith Hall is a hero of awesome courage and eloquence."—Frank Kramer, Harvard Book Store, Cambridge, MA

"Without a Map is Meredith Hall’s memoir, the story of giving up a child at the age of sixteen, and then meeting him when he was twenty-one, years later, and now forging a relationship with him. It’s an unbelievable read." —Robin Young, "Here and Now"