Without a Map: A Memoir (Paperback) 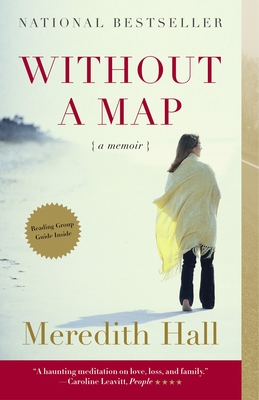 By Meredith Hall
$17.00
Usually arrives at our store within 4-7 days

Meredith Hall's moving but unsentimental memoir begins in 1965, when she becomes pregnant at sixteen. Shunned by her insular New Hampshire community, she is then kicked out of the house by her mother. Her father and stepmother reluctantly take her in, hiding her before they finally banish her altogether. After giving her baby up for adoption, Hall wanders recklessly through the Middle East, where she survives by selling her possessions and finally her blood. She returns to New England and stitches together a life that encircles her silenced and invisible grief. When he is twenty-one, her lost son finds her. Hall learns that he grew up in gritty poverty with an abusive father—in her own father's hometown. Their reunion is tender, turbulent, and ultimately redemptive. Hall's parents never ask for her forgiveness, yet as they age, she offers them her love. What sets Without a Map apart is the way in which loss and betrayal evolve into compassion, and compassion into wisdom.

Meredith Hall graduated from Bowdoin College at the age of 44. She wrote her first essay, “Killing Chickens,” in 2002. Two years later, she won the $50,000 Gift of Freedom Award from A Room of Her Own Foundation, which gave her the financial freedom to devote time to her memoir Without a Map.

Her other honors include a Pushcart Prize and notable essay recognition in Best American Essays. She was also a finalist for the Rona Jaffe Award. Hall’s work has appeared in the New York Times, Creative Nonfiction, The Southern Review, Five Points, Prairie Schooner, and several anthologies. She teaches writing at the University of New Hampshire and lives in Maine.

"First-time author Hall pens a haunting meditation on love, loss, and family . . . Hall colors outside the lines with this memoir, full of unexpected twists and turns."—Caroline Leavitt, People (rated 4 out of 4 stars)

"Hall's memoir is a sobering portrayal of how punitive her close-knit New Hampshire community was in 1965 when, at the age of 16, she became pregnant in the course of a casual summer romance . . . Hall offers a testament to the importance of understanding and even forgiving the people who, however unconscious or unkind, have made us who we are."—Francine Prose, O Magazine

"Meredith Hall's long journey from an inexcusably betrayed girlhood to the bittersweet mercies of womanhood is a triple triumph—of survival; of narration; and of forgiveness. Without a Map is a masterpiece."—David James Duncan, author of The Brothers K and God Laughs and Plays

"Each chapter of Without a Map is polished and elegantly written . . . the structure is shapely and the book yields poignant insights."—Juliet Wittman, Washington Post

"In 1965, in a small New Hampshire town, sixteen-year-old Meredith Hall got pregnant and was consequently kicked out of her school, home, church, and community. Hall's mother sent her to another town to live with her father and stepmother, who confined her to the house. Days after giving birth (her baby was put up for adoption), she interviewed at a boarding school where she was forbidden to mention anything about her past. Hall's memoir, Without a Map, is a devastating story of what happens when a person is exiled from her own life."—Frances Lefkowitz, Body + Soul

"Meredith Hall's magnificent book held me in its thrall from the moment I began reading the opening pages . . . a fluid, beautifully written, hard-won piece of work that belongs on the shelf next to the best modern memoirs."—Dani Shapiro, author of Black and White

"An unusually elegant memoir that feels as though it's been carved straight out of Meredith Hall's capacious heart. The story is riveting, the words perfect."—Lauren Slater, author of Welcome to My Country and Opening Skinner's Box

"Without a Map is stunning . . . Book groups, take note."—Booklist