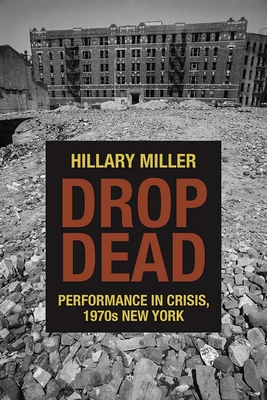 By Hillary Miller
This item is not available.
Not Available

Hillary Miller’s Drop Dead: Performance in Crisis, 1970s New York offers a fascinating and comprehensive exploration of how the city’s financial crisis shaped theater and performance practices in this turbulent decade and beyond.

New York City’s performing arts community suffered greatly from a severe reduction in grants in the mid-1970s. A scholar and playwright, Miller skillfully synthesizes economics, urban planning, tourism, and immigration to create a map of the interconnected urban landscape and to contextualize the struggle for resources. She reviews how numerous theater professionals, including Ellen Stewart of La MaMa E.T.C. and Julie Bovasso, Vinnette Carroll, and Joseph Papp of The Public Theater, developed innovative responses to survive the crisis.

Combining theater history and close readings of productions, each of Miller’s chapters is a case study focusing on a company, a production, or an element of New York’s theater infrastructure. Her expansive survey visits Broadway, Off-, Off-Off-, Coney Island, the Brooklyn Academy of Music, community theater, and other locations to bring into focus the large-scale changes wrought by the financial realignments of the day.

Nuanced, multifaceted, and engaging, Miller’s lively account of the financial crisis and resulting transformation of the performing arts community offers an essential chronicle of the decade and demonstrates its importance in understanding our present moment.

HILLARY MILLER is an assistant professor of English at Queens College, City University of New York.

"Drop Dead makes a distinctive and valuable contribution to theatre and performance studies scholarship. It is careful and nuanced in its approach to theatre-historical practices, and introduces an urban frame that changes how these practices have commonly been narrated and understood." — Michael McKinnie, author of City Stages: Theatre and Urban Space in a Global City

“In her exciting study, named for the Daily News headline of 1975 protesting the federal refusal to help out New York City, Hillary Miller combines urban geography and theater history to focus on the cash-starved performing arts in New York’s fiscal crisis of the 1970s. Reversing the traditional zero-sum picture of New York theater, Miller takes little interest in the commercial stages of midtown Manhattan and focuses instead on Brooklyn, street and neighborhood performance across the city, and the downtown emergence of La MaMa and the Public. The reader is left almost aching with nostalgia for the bad old times.”—Elinor Fuchs, author of The Death of Character: Perspectives on Theater after Modernism

"Drop Dead newly centralizes the 1970s economic crisis... and does so with careful attention to geography, race, and management styles. The book’s archive of venues productively undoes neat categories of experimental, community, and Broadway theatre... Miller’s archive also interlaces economic crisis with race, illuminating how advertising failed to connect with black Broadway attendees and how some white Lincoln Center subscribers devalued playwrights of colour as non-canonical. As such, the book might buttress theatre courses on the 1970s, New York City, and neoliberalism. Additionally, an arts management course might benefit from examining the management styles of Stewart, Carroll, and Papp to consider how their mediation of crisis–enmeshed in geography, race, and the federal neglect of New York City–produced shifting modes of producing and valuing theatre." —Modern Drama