City of Bones: A Testament (Paperback) 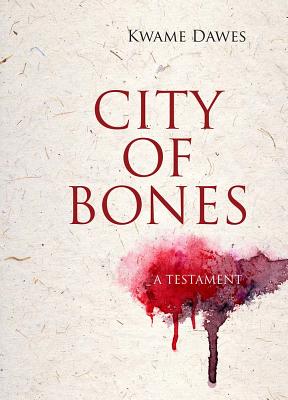 As if convinced that all divination of the future is somehow a re-visioning of the past, Kwame Dawes reminds us of the clairvoyance of haunting. The lyric poems in City of Bones: A Testament constitute a restless jeremiad for our times, and Dawes’s inimitable voice peoples this collection with multitudes of souls urgently and forcefully singing, shouting, groaning, and dreaming about the African diasporic present and future.

As the twentieth collection in the poet’s hallmarked career, City of Bones reaches a pinnacle, adding another chapter to the grand narrative of invention and discovery cradled in the art of empathy that has defined his prodigious body of work. Dawes’s formal mastery is matched only by the precision of his insights into what is at stake in our lives today. These poems are shot through with music from the drum to reggae to the blues to jazz to gospel, proving that Dawes is the ambassador of words and worlds.

KWAME DAWES is the author of nineteen books of poetry as well as numerous collections of fiction, criticism, and essays, and the editor of more than a dozen anthologies. Dawes is Glenna Luschei Editor of Prairie Schooner and teaches at the University of Nebraska and in the Pacific M.F.A. Writing Program. He is the founding director of the African Poetry Book Fund and the artistic director of the Calabash International Literary Festival. He lives in Lincoln, Nebraska.

"The City of Bones stands beside the light found in Claudia Rankine’s Citizen. It is an urgent work of poetry that begets civic empathy, indictment, and clarity; one that stands in, but will travel well beyond, its own time. This is a major new book by a major poet." —Rebecca Gayle Howell, author of Render: An Apocalypse

“City of Bones is a poet’s testament, his vision of time’s past and future. Composed in a language that is highly intelligent, tightly wrought, and buoyant—the inherent lyric quality derives its swing from reggae, blues, jazz, gospel, and spoken-word traditions—it is a road map tarred in civilizational wisdom. This is an astonishingly fine book. If I were to predict a future Nobel Prize winner in literature, it would more than likely be Kwame Dawes.”
—Sudeep Sen, author of EroText and editor of The HarperCollins Book of English Poetry


“In this book-length journey, Kwame Dawes guides the reader through the many circles of mnemonic hell. His are poems nailed into the white pages with the force of bestial silence; thick-neck poems written by a poet with hands and ear for old bones, for the shattering of breaking time, for the rituals of manhood. Whenever I picked a new book from the shelf, I always hoped it would be exactly this.” —Valzhyna Mort, author of Factory of Tears

“This testament is one of the remarkable books of contemporary English-language letters. I celebrate Dawes and his achievement, and in doing so celebrate all those who have a space in his poems and all those who are able to tune into his remarkable music, intellect, and spirit.”
—John Kinsella, author of Jam Tree Gully and Firebreaks

“Extending Kwame Dawes’s already wide-ranging and prolific body of work, City of Bones is a testament to a complicated past that replays itself in the daily lives of so many Americans today. In the shadow of the Thirteenth Amendment Dawes remixes the works of August Wilson and brings lucidity to our present moment. Unafraid to trouble the waters and make clear why American race relations exist as they currently do, City of Bones sets the record straight and leaves no doubt that the past is ever present and we have not yet overcome. City of Bones should leave no question in the minds of any contemporary reader that Kwame Dawes is one of the most significant poets working today. This is poetry’s ‘Redemption Song.’”
—Matthew Shenoda, author of Tahrir Suite

“Why read Kwame Dawes? Because he knows how to ‘listen for the calm voice of God.’ Because he will show you how to grieve and not be torn open. Because his poem “The Things You Forget in Jail” shares with us empathy so unlike that of most North American poets at work today. Go back to him because Dawes is in love with ‘music of mint, ginger root, garlic, sweet / onion” of our language, its tormented ‘promise of good earth.’ Why read him? Because words ‘when spoken will soften / your chest.’ Why read Kwame Dawes? Because you cannot stop. Because Dawes is the poet to read when ‘all talking / is over’ and you sit alone in this room.” —Ilya Kaminsky, author of Dancing in Odessa

"One of Kwame Dawes’s many gifts is a supreme ability to absorb his reading of others and make it his own. His is always a signal voice, but in it you hear legions: the stories of men and women, from the present and the past. There are constants in his work: faith in meaning beyond the passage of time and the dissolution of the body—whilst at the same time investing so bracingly in its resistant physicality; the urge for freedom and justice in a racialized landscape of constant entanglements; and a concern with the relationship between tradition and innovation in art. 'Thieving' is a key poem in this collection where yet again Kwame Dawes makes it new." —Jeremy Poynting, Managing Editor of Peepal Tree Press