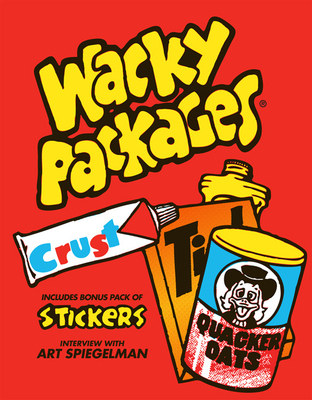 By Art Spiegelman (Introduction by), The Topps Company
$21.95
Email or call for price.

Wacky Packages—a series of collectible stickers featuring parodies of consumer products and well-known brands and packaging—were first produced by the Topps company in 1967, then revived in 1973 for a highly successful run. In fact, for the first two years they were published, Wacky Packages were the only Topps product to achieve higher sales than their flagship line of baseball cards. The series has been relaunched several times over the years, most recently to great success in 2007.

Known affectionately among collectors as “Wacky Packs,” as a creative force with artist Art Spiegelman, the stickers were illustrated by such notable comics artists as Kim Deitch, , Bill Griffith, Jay Lynch, and Norm Saunders.

This first-ever collection of Series One through Series Seven (from 1973 and 1974) celebrates the 35th anniversary of Wacky Packages and is sure to amuse collectors and fans young and old.

The Topps Company, Inc., founded in 1938, is the preeminent creator and brand marketer of sports cards, entertainment products, and distinctive confectionery. Gary Gerani is the creator, editor, and writer of hundreds of Topps trading card sets and the author of multiple titles in our Topps trading card series. He lives in Los Angeles. Chip Kidd is an award-winning graphic designer, writer, and editor-at-large at Pantheon. His books on comics include Only What’s Necessary: Charles M. Schulz and the Art of Peanuts and Shazam! The Golden Age of the World’s Mightiest Mortal. He lives in New York City.