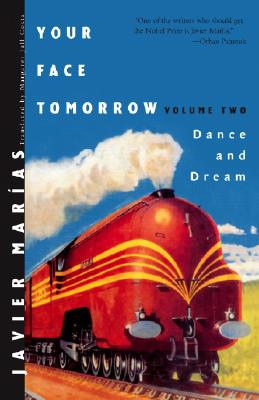 By Javier Marías, Margaret Jull Costa (Translated by)
$18.95
Email or call for price.

A book unlike any other, a daring experiential unfolding Spanish masterpiece, Your Face Tomorrow now leaps into uncharted new territory in Volume Two: Dance and Dream.

Your Face Tomorrow, Javier Marias's dazzling unfolding magnum opus, is a novel in three parts, which began with Volume One: Fever and Spear. Described as a "brilliant dark novel" (Scotland on Sunday), the book now takes a wild swerve in its new volume. Skillfully constructed around a central perplexing and mesmerizing scene in a nightclub, Volume Two: Dance and Dream again features Jacques Deza. In Volume One he was hired by MI6 as a person of extraordinarily sophisticated powers of perception. In Volume Two Deza discovers the dark side of his new employer when Tupra, his spy-master boss, brings out a sword and uses it in a way that appalls Deza: You can't just go around hurting and killing people like that. Why not? asks Tupra.

Searching meditations on favors and jealousy, knowledge and the deep human desire not to know, violence and death play against memories of the Spanish Civil War as Deza's world becomes increasingly murky.

Javier Marías is an award-winning Spanish novelist. He is also a translator and columnist, as well as the current king of Redonda. He was born in Madrid in 1951 and published his first novel at the age of nineteen. He has held academic posts in Spain, the US (he was a visiting professor at Wellesley College) and Britain, as a lecturer in Spanish Literature at Oxford University. He has been translated into 34 languages, and more than six million copies of his books have been sold worldwide. In 1997 he won the Nelly Sachs Award; the Comunidad de Madrid award in 1998; in 2000 the Grinzane Cavour Award, the Alberto Moravia Prize, and the Dublin IMPAC Award. He also won the Spanish National Translation Award in 1979 for his translation of Tristram Shandy in 1979. He was a professor at Oxford University and the Complutense of Madrid. He currently lives in Madrid.

Your Face Tomorrow is already being compared to Proust’s A la recherche du temps perdu, and rightly so.

The overall effect recalls the cerebral play of Borges, the dark humor
of Pynchon, and meditative lyricism of Proust.
— Review of Contemporary Fiction

By one of the most original writers at work today, Your Face Tomorrow [is] as accomplished and sui generis as all his mature work [and the] most affecting narrative feat in Marías’s work to date.

This brilliant trilogy must be one of the greatest novels of our age.
— Antony Beevor - The Sunday Telegraph [London]

I would like to forget this novel but it is hard to get it out of one’s
mind. We wait uneasily for Volume Three.
— Margaret Drabble - Times Literary Supplement