The Great Hunt: Book Two of 'The Wheel of Time' (Mass Market) 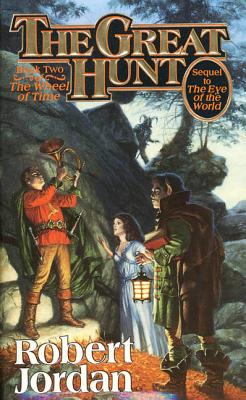 This is book number 2 in the Wheel of Time series.

Soon to be an original series starring Rosamund Pike as Moiraine!

Robert Jordan’s #1 New York Times bestselling epic fantasy series, The Wheel of Time®, continues as Rand al’Thor and his companions set out to retrieve a powerful magical artifact from The Dark One’s Shadowspawn in The Great Hunt.

For centuries, gleemen have told the tales of The Great Hunt of the Horn. So many tales about each of the Hunters, and so many Hunters to tell of...

Now the Horn itself is found: the Horn of Valere long thought only legend, the Horn which will raise the dead heroes of the ages.

And it is stolen.

In pursuit of the thieves, Rand al’Thor is determined to keep the Horn out of the grasp of The Dark One. But he has also learned that he is The Dragon Reborn—the Champion of Light destined to stand against the Shadow time and again. It is a duty and a destiny that requires Rand to uncover and master magical capabilities he never imagined he possessed.

Since its debut in 1990, The Wheel of Time® has captivated millions of readers around the globe with its scope, originality, and compelling characters. The last six books in series were all instant #1 New York Times bestsellers, and The Eye of the World was named one of America's best-loved novels by PBS's The Great American Read.

By Robert Jordan
Warrior of the Altaii

Praise for The Great Hunt


“Jordan has come to dominate the world that Tolkien began to reveal… The battle scenes have the breathless urgency of firsthand experience, and the… evil laced into the forces of good, the dangers latent in any promised salvation, the sense of the unavoidable onslaught of unpredictable events bear the marks of American national experience during the last three decades.” – Edward Rothstein, The New York Times


“Those who like fantasy can rejoice. This is the genuine article… characters you can care about, a world you can believe in, hideous monsters, battles, magic, even love.
“I only have one problem. How am I going to get by until the next volume comes out?”— John Lee, author of The Unicorn Solution


“Rousing, slam-bang… full of valiant skirmishes, great heroes, and close rescues. The real war is only beginning, but this one battle at least ends with the sort of grand finale worth re-reading a time or two.” – Locus


“This is good stuff. To write one absorbing he long novel [The Eye of the World] is an achievement; to write two is miraculous, and [with The Great Hunt Jordan has] achieved the miracle… I shall certainly [line up] for the third volume.” – Interzone


Praise for The Wheel of Time Book One


The Eye of the World


“New readers are advised to start with the first book, The Eye of the World. It may take you a year of steady reading, but by the next year you’ll be chomping at the bit to jump on the [newest] book.” – Robert Knox, MPG Newspapers


“The Eye of the World is the best of its genre.” – The Ottawa Citizen


“A major piece of fantasy. Jordan has not merely put old wine into new bottles; he has clothed old bones with new flesh.” – Chicago Sun-Times


“Jordan’s world is rich in detail and his plot is rich in incident. Highly recommended.” – ALA Booklist


“A powerful vision of good and evil… [and] fascinating people moving through a rich and interesting world.” – Orson Scott Card


“Magic and pacing and detail and human involvement, with a certain subtlety of presentation and a grand central vision. Robert Jordan… is a lot of writer!”—Piers Anthony


“An exciting story; the reader is drawn in early and kept there until the last page. There is adventure and mystery and dark things that move in the night- a combination of Robin Hood and Stephen King that is hard to resist… Jordan makes the reader care about these characters as though they were old friends.” – Milwaukee Sentinel


“Goodness, life, and light are always in retreat, always about to be defeated, but never quite! Don’t miss it!” – Andrew M. Greeley


“One hell of a story. [It] kept me up past my bedtime for three nights running— and it’s been a long time since a novel’s done that. Jordan keeps the suspense acute and the surprises and invention beautifully paced. Compelling. An exhilarating experience” – Isaac Asimov’s Science Fiction Magazine