Engulfed: The Death of Paramount Pictures and the Birth of Corporate Hollywood (Paperback) 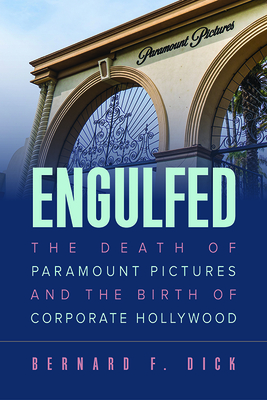 From Double Indemnity (1944) to The Godfather (1972), the stories behind some of the greatest films ever made pale beside the story of the studio that made them. In the golden age of Hollywood, Paramount was one of the Big Five studios. Gulf + Western's 1966 takeover of the studio signaled the end of one era and heralded the arrival of a new way of doing business in Hollywood. Bernard F. Dick reconstructs the battle that reduced the studio to a mere corporate commodity and traces Paramount's devolution from freestanding studio to subsidiary -- first of Gulf + Western, then of Paramount Communications, and currently, of Viacom-CBS.

Dick portrays the new Paramount as a paradigm of today's Hollywood, where the only real art is the art of the deal. In modern Hollywood, former merchandising executives find themselves in charge of production on the assumption that anyone who can sell a movie can make one. CEOs exit in disgrace from one studio, only to emerge in triumph at another. Corporate raiders vie for power and control, purchasing and selling film libraries, studio property, television stations, book publishers, and more. The history of Paramount is filled with larger-than-life people, including Billy Wilder, Adolph Zukor, Sumner Redstone, Shari Redstone, Sherry Lansing, Barry Diller, Michael Eisner, Jeffrey Katzenberg, and more.

Bernard F. Dick is professor emeritus of communications and English at Fairleigh Dickinson University (Teaneck campus). He holds a doctorate in classics from Fordham University and is the author of numerous film books including Anatomy of Film, Hal Wallis, and That Was Entertainment.