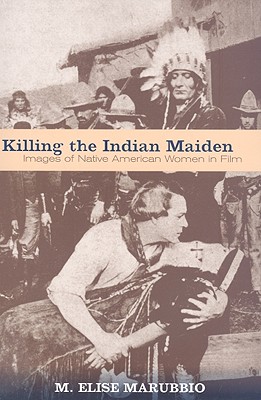 Killing the Indian Maiden examines the fascinating and often disturbing portrayal of Native American women in film. Through discussion of thirty-four Hollywood films from the silent period to the present, M. Elise Marubbio examines the sacrificial role of what she terms the "Celluloid Maiden" -- a young Native woman who allies herself with a white male hero and dies as a result of that choice. Marubbio intertwines theories of colonization, gender, race, and film studies to ground her study in sociohistorical context all in an attempt to define what it means to be an American. As Marubbio charts the consistent depiction of the Celluloid Maiden, she uncovers two primary characterizations -- the Celluloid Princess and the Sexualized Maiden. The archetype for the exotic Celluloid Princess appears in silent films such as Cecil B. DeMille's The Squaw Man (1914) and is thoroughly established in American iconography in Delmer Daves's Broken Arrow (1950). Her more erotic sister, the Sexualized Maiden, emerges as a femme fatale in such films as DeMille's North West Mounted Police (1940), King Vidor's Duel in the Sun (1946), and Charles Warren's Arrowhead (1953). The two characterizations eventually combine to form a hybrid Celluloid Maiden who first appears in John Ford's The Searchers (1956) and reappears in the 1970s and the 1990s in such films as Arthur Penn's Little Big Man (1970) and Michael Apted's Thunderheart (1992). Killing the Indian Maiden reveals a cultural iconography about Native Americans and their role in the frontier embedded in the American psyche. The Native American woman is a racialized and sexualized other -- a conquerable body representing both the seductions and the dangers of the frontier. These films show her being colonized and suffering at the hands of Manifest Destiny and American expansionism, but Marubbio argues that the Native American woman also represents a threat to the idea of a white America. The complexity and longevity of the Celluloid Maiden icon -- persisting into the twenty-first century -- symbolizes an identity crisis about the composition of the American national body that has played over and over throughout different eras and political climates. Ultimately, Marubbio establishes that the ongoing representation of the Celluloid Maiden signals the continuing development and justification of American colonialism.