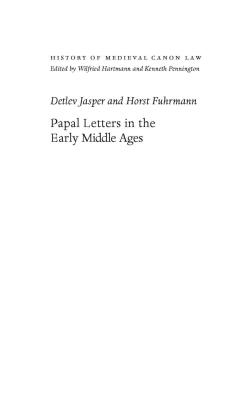 This second volume in the History of Medieval Canon Law series discusses the earliest papal decretals, covering the period from the end of the fourth century to the end of the ninth century. In contrast to earlier scholarly works, which usually skim over the beginnings of the papal decretal tradition and the earliest collections containing them, the authors begin with the first papal letters and thoroughly describe their transmission and reception into the canonical tradition up to Gratian's Decretum (1140). They examine the letters of twenty-five popes from Siricius (384-399), whose pontificate undoubtedly produced the first known papal decretal in 385, to Stephen V (885-891).

"Exceptionally clear and helpful, this volume will be welcome by those who have no German or, even more, to those who have no time to plow through the massive literature on the emergence of decretals, the early history of the papal archives, the reception of early decretals in later collections down to Gratian, and the massive collection known as Pseudo-Isidore. . . . Jasper is especially good on the emergence of the papal correspondence, on the rise of the decretals, and on the formation of collections of papal letters. Fuhrmann opens fascinating insights into the papal correspondence by exploring how clever forgers created papal letters whose forms and claims had plausibility."--Theological Studies

"The research of Detlev Jasper and Horst Fuhrmann, the leading authorities on early medieval papal law, has now become accessible to a broad, new audience. . . . The series editors intended Papal Letters to be a point of entry for readers who want to learn about papal law before the twelfth century. In Jasper and Fuhrmann they could not have hoped for more reliable guides."--John J. Contreni, Journal of Religion