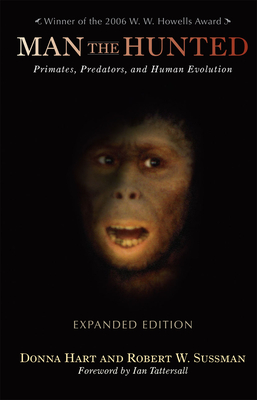 By Donna Hart, Robert W. Sussman
This item is not available.

Man the Hunted argues that primates, including the earliest members of the human family, have evolved as the prey of any number of predators, including wild cats and dogs, hyenas, snakes, crocodiles, and even birds. The authors' studies of predators on monkeys and apes are supplemented here with the observations of naturalists in the field and revealing interpretations of the fossil record. Eyewitness accounts of the 'man the hunted' drama being played out even now give vivid evidence of its prehistoric significance.

This provocative view of human evolution suggests that countless adaptations that have allowed our species to survive (from larger brains to speech), stem from a considerably more vulnerable position on the food chain than we might like to imagine. The myth of early humans as fearless hunters dominating the earth obscures our origins as just one of many species that had to be cautious, depend on other group members, communicate danger, and come to terms with being merely one cog in the complex cycle of life.

Donna Hart is associate teaching professor of anthropology at the University of Missouri-St. Louis and was a professional in the field of wildlife conservation for many years. Her current writing projects include The Complex Nature of Human Variation (forthcoming, Westview Press).Robert W. Sussman is professor of physical anthropology and environmental science at Washington University (St. Louis), editor emeritus of American Anthropologist, and is currently editor of Yearbook of Physical Anthropology and secretary of the anthropology section of the American Association for the Advancement of Science. He is the author of many scientific articles and books on anthropology and primatology.

"In telling a story about our evolution that is grounded in real data and avoids popular psychobabble about the nature of human aggression, Man the Hunted is a substantial contribution to understanding humanity. Hart and Sussman deftly demonstrate the dual roles of predation and cooperation in human evolution, effectively challenging simplistic notions of 'man the hunter' or 'man the aggressor.'"
—Agustín Fuentes, University of Notre Dame

"Hart and Sussman have produced a book that is engaging to read, with minimal (or fully explained) jargon and interesting stories, which should be accessible to a broad audience. It is well illustrated and well referenced."
—Journal of Anthropological Research

"Man the Hunted is a necessary antidote against attempts to fit our ancestors into neat, but almost certainly inappropriate, behavioral categories of 'hunter vs. scavenger' and instead helps move us in the direction of more realistic and nuanced reconstructions of the behavior of our ancestors."
—Bernard Wood, George Washington University


"Man the Hunted sends a jolt through the field of human evolution by empirically undermining some of the assumptions of its most familiar bio-historical narratives. What was it like to be a bipedal ape in Africa with primitive stone tools? Probably not very nice. And how did we get where we are today—via individual red-in-tooth-and-claw natural selection leading us to the top of the food chain? No, argue Hart and Sussman—by group social processes of affiliation and cooperation that kept us off the bottom of the food chain. This superbly documented and cleverly argued book provides a sophisticated scholarly antidote to the reductive pseudo-biology that has passed for too long as a master narrative of human origins."
—Jon Marks, UNC-Charlotte

"Man the Hunted … is accessible and interesting to the lay reader. …The authors describe and debate the common view of Man as the evolving hunter and present their own view of Man’s evolution as an adapting prey by integrating fossil records and behavioral data from living predator-prey interactions involving human and nonhuman primates." –American Journal of Human Biology


"Hart and Sussman’s book presents a good synthesis of pertinent ethological observations and a summary of theoretical framing, along with a healthy dose of anecdote." –Evolutionary Anthropology

"In an agile, knowledgeable presentation, the authors contest a popular conception about human evolution: that ancestral hominids were hunters. Hart and Sussman, anthropology professors, think that idea is flimsy. …To make their case, which eminent paleoanthropologist Ian Tattersall extols in a preface as ‘the first comprehensive synthesis of the information available about predation on humans,’ Hart and Sussman marshal both fossils and behavioral studies of living primates. The authors' prose is wryly irreverent, as if intended to keep a lecture class awake and interested. Even readers who instinctively shy away from science would enjoy reading this book."
–Booklist