Becoming Frum: How Newcomers Learn the Language and Culture of Orthodox Judaism (Jewish Cultures of the World) (Paperback) 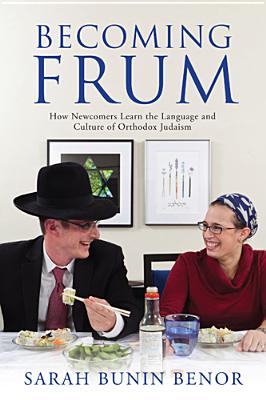 When non-Orthodox Jews become frum (religious), they encounter much more than dietary laws and Sabbath prohibitions. They find themselves in the midst of a whole new culture, involving matchmakers, homemade gefilte fish, and Yiddish-influenced grammar. Becoming Frum explains how these newcomers learn Orthodox language and culture through their interactions with community veterans and other newcomers. Some take on as much as they can as quickly as they can, going beyond the norms of those raised in the community. Others maintain aspects of their pre-Orthodox selves, yielding unique combinations, like Matisyahu’s reggae music or Hebrew words and sing-song intonation used with American slang, as in “mamish (really) keepin’ it real.”

Sarah Bunin Benor brings insight into the phenomenon of adopting a new identity based on ethnographic and sociolinguistic research among men and women in an American Orthodox community. Her analysis is applicable to other situations of adult language socialization, such as students learning medical jargon or Canadians moving to Australia. Becoming Frum offers a scholarly and accessible look at the linguistic and cultural process of “becoming.”

SARAH BUNIN BENOR is an associate professor of contemporary Jewish studies at Hebrew Union College–Jewish Institute of Religion. She has published and lectured widely on sociolinguistics, Jewish languages, and Orthodox Jews.

"Benor's engaging and innovative study of language and identity surprises, delights, and educates. Becoming Frum is a must-read for anyone who wants to understand Jewish language and culture today."
— Mary Bucholtz

"This volume by Benor is a sociolinguistic study of non-Orthodox Jews becoming frum (religious) by returning to the beliefs and practices of Orthodox Jewish life. Nine well-researched chapters underscore the state of hesitation, decision, and action of returnees. Becoming Frum encodes dress change, eating habits, social outlook, and an impressive array of 'dos and don'ts' that will identify the newly observant. Very informative is Benor's investigative scrutiny of frumster speech (religious Yinglish). This is a strong ethnographic study of issues and lessons related to becoming religiously Orthodox observant. Recommended."

"Benor does a superb job of enhancing our understanding of the complex process of cultural change and language socialization that individuals go through as they become observant."
— Jewish Link