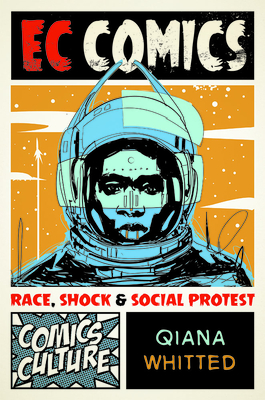 Entertaining Comics Group (EC Comics) is perhaps best-known today for lurid horror comics like Tales from the Crypt and for a publication that long outlived the company’s other titles, Mad magazine. But during its heyday in the early 1950s, EC was also an early innovator in another genre of comics: the so-called “preachies,” socially conscious stories that boldly challenged the conservatism and conformity of Eisenhower-era America.

EC Comics examines a selection of these works—sensationally-titled comics such as “Hate!,” “The Guilty!,” and “Judgment Day!”—and explores how they grappled with the civil rights struggle, antisemitism, and other forms of prejudice in America. Putting these socially aware stories into conversation with EC’s better-known horror stories, Qiana Whitted discovers surprising similarities between their narrative, aesthetic, and marketing strategies. She also recounts the controversy that these stories inspired and the central role they played in congressional hearings about offensive content in comics.

The first serious critical study of EC’s social issues comics, this book will give readers a greater appreciation of their legacy. They not only served to inspire future comics creators, but also introduced a generation of young readers to provocative ideas and progressive ideals that pointed the way to a better America.

QIANA WHITTED is a professor of English and African American studies at the University of South Carolina in Columbia. She is the author of A God of Justice?: The Problem of Evil in 20th Century Black Literature.

“Qiana Whitted’s well-written study confirms and complicates EC’s reputation as the most aesthetically ambitious and politically daring comic book company of the twentieth-century. A subtle exploration of the relationship between race, gender, and representation, it should be considered essential reading for anyone with an investment in modern popular culture.”
— Ben Saunders

"Qiana Whitted’s insightful book EC Comics thoughtfully weaves together carefully researched historical context, keen analysis of the discourse communities surrounding EC, and meticulous close readings of the comics, ultimately building a powerful argument for the decisive role the company and its comics played in combating social injustices of the day while advocating for a better, more inclusive society in the future."
— Susan Kirtley

"This is a scholarly exploration of a much maligned genre of comic, with heavy examination of the implications both inside the comics and of the outside commenters. The beautifully illustrated, comic-style cover may send some in the wrong direction if they're not ready for such a heavy reading, but if they stay with it, they will be richly rewarded.
— Pop Matters

"The book restores some specificity to our understanding of the way cultural norms were contested in the pages of postwar comics. It also delivers a measured appraisal of how the ostensibly shocking tactics of social protest comics secured a space in the public imagination for the modest ambitions of moral appeals for social change before the uptake of more radical civil rights discourse."
— Inks: The Journal of the Comics Studies Society

"Whitted’s book is an excellent example of how comics can serve as tools of social protest and instigate new realms of thought in both young and old readers alike. [It] is a worthwhile entry in the field of comics studies. Qiana Whitted provides sharp analysis and insight into a publisher that pushed the boundaries of what was acceptable for a young medium to do."
— The Journal of Graphic Novel and Comics

"Whitted delivers in her analysis, which takes note of the texts in such an exemplary manner, interprets the drawings, perspectives and the inkwork without neglecting the coloring, and ultimately also takes cultural and publication contexts and economic conditions into account. The result is a careful, differentiating and yet clear reading of the comics, which has seldom been taken as seriously as here."
— Comic.de