Anthropocene Fictions: The Novel in a Time of Climate Change (Under the Sign of Nature) (Paperback) 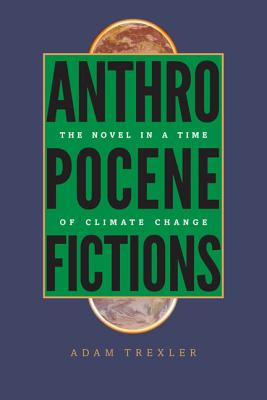 By Adam Trexler
This item is not available.

Since the Industrial Revolution, humans have transformed the Earth's atmosphere, committing our planet to more extreme weather, rising sea levels, melting polar ice caps, and mass extinction. This period of observable human impact on the Earth's ecosystems has been called the Anthropocene Age. The anthropogenic climate change that has impacted the Earth has also affected our literature, but criticism of the contemporary novel has not adequately recognized the literary response to this level of environmental crisis. Ecocriticism's theories of place and planet, meanwhile, are troubled by a climate that is neither natural nor under human control. Anthropocene Fictions is the first systematic examination of the hundreds of novels that have been written about anthropogenic climate change.

Drawing on climatology, the sociology and philosophy of science, geography, and environmental economics, Adam Trexler argues that the novel has become an essential tool to construct meaning in an age of climate change. The novel expands the reach of climate science beyond the laboratory or model, turning abstract predictions into subjectively tangible experiences of place, identity, and culture. Political and economic organizations are also being transformed by their struggle for sustainability. In turn, the novel has been forced to adapt to new boundaries between truth and fabrication, nature and economies, and individual choice and larger systems of natural phenomena. Anthropocene Fictions argues that new modes of inhabiting climate are of the utmost critical and political importance, when unprecedented scientific consensus has failed to lead to action.

Adam Trexler is an independent scholar living in Portland, Oregon