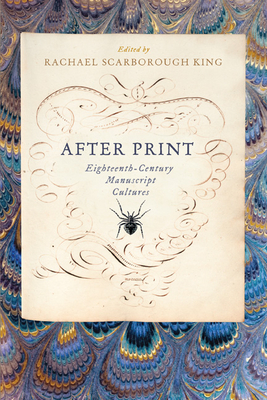 By Rachael Scarborough King (Editor)
This item is not available.
Usually arrives at our store within 4-7 days

The eighteenth century has generally been understood as the Age of Print, when the new medium revolutionized the literary world and rendered manuscript culture obsolete. After Print, however, reveals that the story isn't so simple. Manuscript remained a vital, effective, and even preferred forum for professional and amateur authors working across fields such as literature, science, politics, religion, and business through the Romantic period.

The contributors to this book offer a survey of the manuscript culture of the time, discussing handwritten culinary recipes, the poetry of John Keats, Benjamin Franklin's letters about his electrical experiments, and more. Collectively, the essays demonstrate that what has often been seen as the amateur, feminine, and aristocratic world of handwritten exchange thrived despite the spread of the printed word. In so doing, they undermine the standard print-manuscript binary and advocate for a critical stance that better understands the important relationship between the media.

Bringing together work from literary scholars, librarians, and digital humanists, the diverse essays in After Print offer a new model for archival research, pulling from an exciting variety of fields to demonstrate that manuscript culture did not die out but, rather, may have been revitalized by the advent of printing.

Rachael Scarborough King is Associate Professor of English at the University of California, Santa Barbara, and author of Writing to the World: Letters and the Origins of Modern Print Genres.