Out of Step: A Memoir (Non/Fiction Collection Prize) (Paperback) 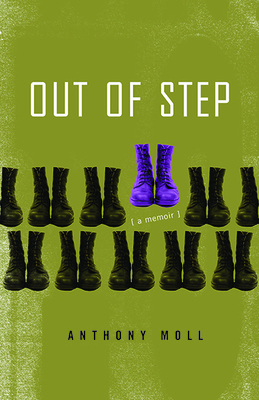 What makes a pink-haired queer raise his hand to enlist in the military just as the nation is charging into war? In his memoir, Out of Step, Anthony Moll tells the story of a working-class bisexual boy running off to join the army in the midst of two wars and the “Don’t Ask, Don’t Tell” era.  Set against the backdrop of hypermasculinity and sexual secrecy, Moll weaves a queer coming-of-age story.
Out of Step traces Moll’s development through his military service, recounting how the army both breaks and builds relationships, and what it was like to explore his queer identity while also coming to terms with his role in the nation’s ugly foreign policy. From a punk, nerdy, left-leaning, poor boy in Nevada leaving home for the first time to an adult returning to civilian life and forced to address a world more complicated than he was raised to believe, Moll’s journey isn’t a classic flag-waving memoir or war story—it’s a tale of finding one’s identity in the face of war and changing ideals.

Anthony Moll is a Baltimore-based writer and educator. His creative work has appeared in Gertrude Journal, Assaracus, jubilat, and more. Anthony holds an MFA in Creative Writing and Publishing Arts and has taught writing at both public and private universities.

“Out of Step is not just Moll’s memoir; it is a loving and empathetic portrayal of those around him, paying explicit attention to the vulnerable, the outcast and the misunderstood.” —Times Literary Supplement


“Filled with raw emotion, wry humor, and unselfconscious reflection, [Out of Step] conveys Moll’s unwavering sense of self in a refreshing, inspiring way.” —Foreword Reviews

“Moll’s evocation of his army life is deadly serious yet always insightful as he questions himself and, finally, tells the truth he discovers.” —Booklist


“Out of Step is the story of a young man trying to find his place in the disparate worlds of American military and civilian life. . . . Moll’s take is thoughtful and fair, both critical of the military while recognizing how it built him.” —Shelf Awareness


“Out of Step is a memoir-in-essays of place and poverty and sexuality and the search for self against the backdrop of military life during the final years of 'Don’t Ask, Don’t Tell.' Moll’s searing clarity, ear for language, and extraordinary range of storytelling methods imbue this essay collection with the musicality of a symphony and the intimacy of a treasured mix-tape. This is a stunning and important book.” —Michael Kardos

“Out of Step is a page turner—a roller coaster that readers will never forget. Moll has a gift for crafting brilliant sentences and has created the type of contemporary memoir that reminds me of why I can’t live without writing. I highly recommend.” — D. Watkins, New York Times best-selling author of The Beast Side and The Cook Up