Witness to Integrity: The Crisis of the Immaculate Heart Community of California (Paperback) 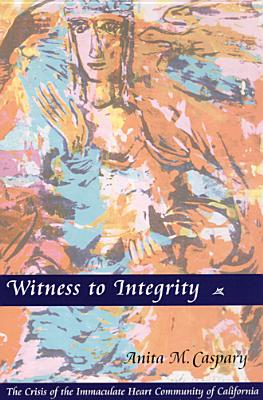 Anita Caspary's personal narrative reflections provide in-depth details of the story that has captured media attention in books, television documentaries, and plays. In addition, the use of original sources from the Immaculate Heart Community archives that have not been open to the public assists in producing new insights and correcting inaccuracies and myths.

Chapters are "The Accusation," "Memories of a Catholic Girlhood," "Background and Beginnings," "Called to be a Nun," "Teacher, Professor, and Administrator," "The Sixties and the Sisters of the Immaculate Heart," "Cardinal James F. McIntyre," "The Archdiocesan Visitations," "The 1967 Chapter of Renewal: Creating the Vision," "Embracing the Vision," "The Cardinal's Response to Renewal," "The Vatican Visitations," "A Test Case for the Vatican," "A New Life for Religious Women," and "The Immaculate Heart Community."