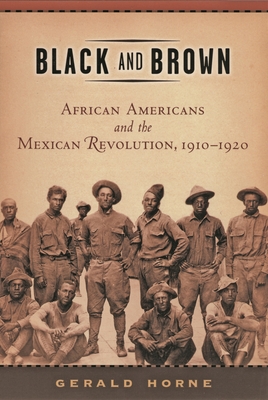 By Gerald Horne
This item is not available.

The Mexican Revolution was a defining moment in the history of race relations, impacting both Mexican and African Americans. For black Westerners, 1910-1920 did not represent the clear-cut promise of populist power, but a reordering of the complex social hierarchy which had, since the nineteenth century, granted them greater freedom in the borderlands than in the rest of the United States. Despite its lasting significance, the story of black Americans along the Mexican border has been sorely underreported in the annals of U.S. history. Gerald Horne brings the tale to life in Black and Brown. Drawing on archives on both sides of the border, a host of cutting-edge studies and oral histories, Horne chronicles the political currents which created and then undermined the Mexican border as a relative safe haven for African Americans. His account addresses blacks' role as "Indian fighters," the relationship between African Americans and immigrants, and the U.S. government's growing fear of black disloyalty, among other essential concerns of the period: the heavy reliance of the U.S. on black soldiers along the border placed white supremacy and national security on a collision course that was ultimately resolved in favor of the latter. Mining a forgotten chapter in American history, Black and Brown offers tremendous insight into the past and future of race relations along the Mexican border.