Border People: Life and Society in the U.S.-Mexico Borderlands (Paperback) 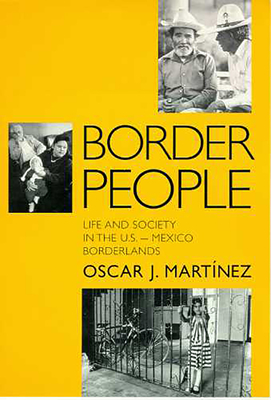 While the U.S.-Mexico borderlands resemble border regions in other parts of the world, nowhere else do so many millions of people from two dissimilar nations live in such close proximity and interact with each other so intensely. Borderlanders are singular in their history, outlook, and behavior, and their lifestyle deviates from the norms of central Mexico and the interior United States; yet these Mexicans, Mexican-Americans, and Anglo-Americans also differ among themselves, and within each group may be found cross-border consumers, commuters, and people who are inclined or disinclined to embrace both cultures. Based on firsthand interviews with individuals from all walks of life, Border People presents case histories of transnational interaction and transculturation, and addresses the themes of cross-border migration, interdependence, labor, border management, ethnic confrontation, cultural fusion, and social activism. Here migrants and workers, functionaries and activists, and "mixers" who have crossed cultural boundaries recall events in their lives related to life on the border. Their stories show how their lives have been shaped by the borderlands milieu and how they have responded to the situations they have faced. Border People shows that these borderlanders live in a unique human environment shaped by physical distance from central areas and constant exposure to transnational processes. The oral histories contained here reveal, to a degree that no scholarly analysis can, that borderlanders are indeed people, each with his or her own individual perspective, hopes, and dreams.

Oscar J. Martínez's own family migrated from the interior of Mexico to El Paso in the 1950s. He is a Regents Professor of History at the University of Arizona.

"The most fascinating parts of this well-presented book are the interviews with all types of border people (one man estimates being caught by immigration officials five times in one day) and many women who've had to endure harsh treatment while living in Mexico and legally working in the U.S. In all, Martínez has extensively covered one of America's most historically pressing concerns, and has done it with dignity and humanity for those both north and south of the border." —Booklist"The book is enjoyable to read and it certainly makes a powerful point about the peculiar nature of border areas. . . . The use of both case studies and life histories is well mastered by the author. The contrast of the use of both in the same book shows its versatillity." —The Latin American Anthropology Review"Martinez's book is a succinct, clear, engrossing and well-written analysis within a historical and international perspective. . . . An important contribution to our understanding of the area." —International Migration Review"An important, insightful, and thought-provoking work by a first rate scholar who is not afraid to try creative approaches in order to shed new light on a complex and fascinating subject." —Journal of Geography