Our Sacred Maíz Is Our Mother: Indigeneity and Belonging in the Americas (Paperback) 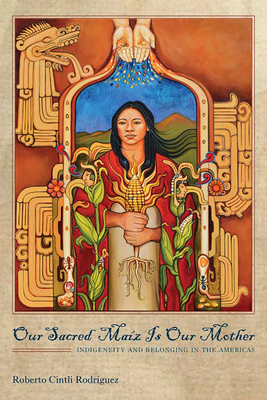 “If you want to know who you are and where you come from, follow the maíz.” That was the advice given to author Roberto Cintli Rodriguez when he was investigating the origins and migrations of Mexican peoples in the Four Corners region of the United States.

Follow it he did, and his book Our Sacred Maíz Is Our Mother changes the way we look at Mexican Americans. Not so much peoples created as a result of war or invasion, they are people of the corn, connected through a seven-thousand-year old maíz culture to other Indigenous inhabitants of the continent. Using corn as the framework for discussing broader issues of knowledge production and history of belonging, the author looks at how corn was included in codices and Mayan texts, how it was discussed by elders, and how it is represented in theater and stories as a way of illustrating that Mexicans and Mexican Americans share a common culture.

Rodriguez brings together scholarly and traditional (elder) knowledge about the long history of maíz/corn cultivation and culture, its roots in Mesoamerica, and its living relationship to Indigenous peoples throughout the continent, including Mexicans and Central Americans now living in the United States. The author argues that, given the restrictive immigration policies and popular resentment toward migrants, a continued connection to maíz culture challenges the social exclusion and discrimination that frames migrants as outsiders and gives them a sense of belonging not encapsulated in the idea of citizenship. The “hidden transcripts” of corn in everyday culture—art, song, stories, dance, and cuisine (maíz-based foods like the tortilla)—have nurtured, even across centuries of colonialism, the living maíz culture of ancient knowledge.

“Rodriguez provides a highly unique and multifaceted account of the ways in which de-Indigenized communities have managed to preserve and pass on knowledge of their traditions across centuries.”—Roberto D. Hernández, San Diego State University

“Sacred maíz narratives offer the opportunity to recover history and, in the process, to recover one’s Indigeneity.”—Lara Medina, author of Las Hermanas: Chicana/Latina Religious-Political Activism in the U.S. Catholic Church

"It's an awesome treatise on the importance of corn in the Americas, combining history with ethnography, cultural studies and a bunch of desmadre."—Gustavo Arellano

“This powerhouse and beautifully written book is a must-read for those who are outraged by how the state of Arizona outlawed the teaching of ethnic studies in the Tucson Unified School District and practiced an auto-da-fé on creative and scholarly works by and about Chican@s and Native American peoples and nations in the borderlands.”—NAIS

“Our Sacred Maíz is Our Mother captures a corpus of important materials and ideas written by past Maestros in Mexico and the U.S. as Rodriguez reframes the discourse academically and in an intelligent manner; most importantly, he gives the ancient tradition a legitimate place in the discourse of academia.”—Indigenous Cultures Institute