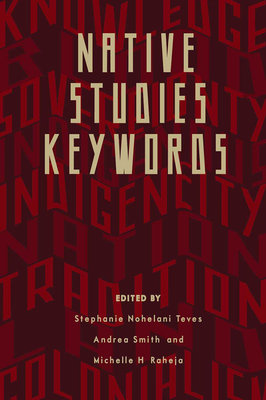 Native Studies Keywords explores selected concepts in Native studies and the words commonly used to describe them, words whose meanings have been insufficiently examined. This edited volume focuses on the following eight concepts: sovereignty, land, indigeneity, nation, blood, tradition, colonialism, and indigenous knowledge. Each section includes three or four essays and provides definitions, meanings, and significance to the concept, lending a historical, social, and political context.

Take sovereignty, for example. The word has served as the battle cry for social justice in Indian Country. But what is the meaning of sovereignty? Native peoples with diverse political beliefs all might say they support sovereignty—without understanding fully the meaning and implications packed in the word.

The field of Native studies is filled with many such words whose meanings are presumed, rather than articulated or debated. Consequently, the foundational terms within Native studies always have multiple and conflicting meanings. These terms carry the colonial baggage that has accrued from centuries of contested words.

Native Studies Keywords is a genealogical project that looks at the history of words that claim to have no history. It is the first book to examine the foundational concepts of Native American studies, offering multiple perspectives and opening a critical new conversation.

Andrea Smith is an associate professor in ethnic studies and media and cultural studies at the University of California, Riverside. Her areas of research include Native studies, religious studies, legal studies, gender studies, and social movements.

Michelle Raheja is an associate professor of English at the University of California, Riverside, where she researches Native American literature, with a special interest in autobiography and film visual culture.

“The book consists of 17 analyses of terms as they appear not in the social science literature but in the literature of postmodernism. This being the case, the book will be most valuable in the humanities, where it will be a fundamental resource for those who generate theories and concepts.”—Choice

“Native Studies Keywords demonstrates a focus on the keyword sovereignty and the value of highlighting its importance in any conversation relating to contemporary Indian country.”—American Indian Culture and Research Journal