The Great Ages of Discovery: How Western Civilization Learned About a Wider World (Hardcover) 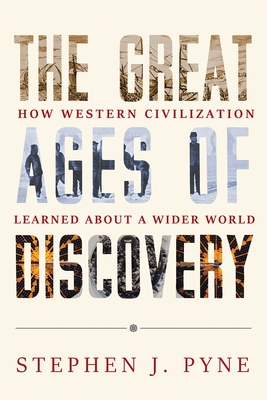 For more than 600 years, Western civilization has relied on exploration to learn about a wider world and universe. The Great Ages of Discovery details the different eras of Western exploration in terms of its locations, its intellectual contexts, the characteristic moral conflicts that underwrote encounters, and the grand gestures that distill an age into its essence.

Historian and MacArthur Fellow Stephen J. Pyne identifies three great ages of discovery in his fascinating new book. The first age of discovery ranged from the early 15th to the early 18th century, sketched out the contours of the globe, aligned with the Renaissance, and had for its grandest expression the circumnavigation of the world ocean. The second age launched in the latter half of the 18th century, spanning into the early 20th century, carrying the Enlightenment along with it, pairing especially with settler societies, and had as its prize achievement the crossing of a continent. The third age began after World War II, and, pivoting from Antarctica, pushed into the deep oceans and interplanetary space. Its grand gesture is Voyager’s passage across the solar system. Each age had in common a galvanic rivalry: Spain and Portugal in the first age, Britain and France—followed by others—in the second, and the USSR and USA in the third.

With a deep and passionate knowledge of the history of Western exploration, Pyne takes us on a journey across hundreds of years of geographic trekking. The Great Ages of Discovery is an interpretive companion to what became Western civilization’s quest narrative, with the triumphs and tragedies that grand journey brought, the legacies of which are still very much with us.

Stephen J. Pyne is an emeritus professor at Arizona State University. The Great Ages of Discovery consolidates and amplifies his work on the history and meaning of exploration by the West. He has also written widely on the history of fire.

“Stephen Pyne charts a new course through the history of exploration, navigating deftly among ruminations, reflections, themes, and concepts. He sees exploration as an intellectual adventure. Readers who accompany him will have a lucid, engaging, and magisterial guide. They can undertake odysseys without leaving their armchairs.”—Felipe Fernández-Armesto, author of Out of Our Minds: What We Think and How We Came to Think It

“This book is panoramic and monumental, calling to mind the works of J. H. Parry and William H. Goeztmann. Like a gracefully carved triptych, Stephen J. Pyne divides his narrative into three Great Ages of Discovery, each of which corresponds with a major chapter in Western intellectual history: the Renaissance, the Enlightenment, and Modernism. Always lucid, rich in metaphor, and insightful, Pyne not only shows his mastery of the subject, but he succeeds in conveying the spirit of adventure associated with it as well. The Great Ages of Discovery will revive exploration history.”—Kevin J. Fernlund, author of William Henry Holmes and the Rediscovery of the American West

“Stephen J. Pyne’s inviting interpretation of more than five centuries of exploration demonstrates that there is something new under the Sun. His categorization of three Great Ages of Discovery are uniquely satisfying.”—Roger D. Launius, author of Apollo’s Legacy: Perspectives on the Moon Landings

“With this introduction to five centuries of history, Stephen Pyne offers a sweeping narrative that charts the coevolution of Western society with exploration, violence, cultural appropriation, and biogeographic upheaval. Pyne offers us a startling vision of discovery’s past, from Vasco da Gama to the Voyager space mission, with surprising implications for intellectual life and even contemporary science.”—Jacob Darwin Hamblin, author of Arming Mother Nature: The Birth of Catastrophic Environmentalism