We Shall Build Anew: Stephen S. Wise, the Jewish Institute of Religion, and the Reinvention of American Liberal Judaism (Jews and Judaism: History and Culture) (Hardcover) 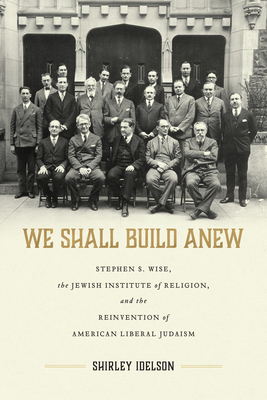 How Rabbi Stephen S. Wise changed the trajectory of American Reform Judaism over the course of the twentieth century and well into the twenty-first

In 1922, Rabbi Stephen S. Wise, a leader of the Zionist movement, established the Jewish Institute of Religion (JIR), a nondenominational rabbinical seminary in New York City. Having already founded the thriving Free Synagogue movement and the American Jewish Congress, he intended to revolutionize American liberal Judaism. Wise believed mainstream American Jewish institutions had become outdated, and he championed a progressive Jewish nationalism that would fight alongside America’s leading proponents of social and economic justice.

We Shall Build Anew tells the little-known story of how Wise changed the trajectory of American Judaism for the next century. Through JIR, he trained a new cadre of young rabbis who shared his outlook, charged them with invigorating and reshaping Jewish life, and launched them into positions of leadership across the country. While Wise earned the ire of many mainstream Jewish leaders through his disregard for denominational distinctions, JIR became home to faculty and students of widely divergent religious and political viewpoints.

We Shall Build Anew is the first book dedicated exclusively to the history of the Jewish Institute of Religion. The story of Wise’s vision for American liberal Judaism is now more important than ever. As American Jewry becomes increasingly polarized around debates concerning religious doctrine as well as Zionism and Israel, the JIR model offers hope that progressives and conservatives, Zionists and non-Zionists, and Jews representing the full spectrum of religious life cannot only coexist but also work together in the name of a vibrant Judaism and a just and peaceful world.

Shirley Idelson is Leon A. Jick Director of the Hornstein Jewish Professional Leadership Program at Brandeis University. She served as dean of Hebrew Union College–Jewish Institute of Religion from 2007 to 2016, and she is coeditor of Lesbian Rabbis: The First Generation.

“In We Shall Build Anew, Shirley Idelson has combined the discipline and knowledge of a skilled academic researcher with the talents and style of a master narrator to provide a comprehensive and compelling tale of Stephen S. Wise and his Jewish Institute of Religion against the backdrop of an evolving twentieth-century American Jewish world. In so doing, Idelson has made an original contribution to American Jewish history and presented an instructive model of rabbinic leadership that resonates profoundly today. We Shall Build Anew will deservedly command a readership of scholars and laypersons alike!”
—David Ellenson, author of Rabbi Esriel Hildesheimer and the Creation of a Modern Jewish Orthodoxy

“The Jewish Institute of Religion, founded and led by Rabbi Stephen S. Wise, played a central role in the reinvention of twentieth-century liberal Judaism. In this deeply researched and engagingly written volume, Shirley Idelson provides a warts-and-all history of JIR, including its ongoing legacy and conspicuous shortcomings. A welcome contribution both to the study of American Judaism and to our understanding of America’s seminaries and divinity schools.”
—Jonathan D. Sarna, author of American Judaism: A History

“We Shall Build Anew is a much-needed in-depth study about the Jewish Institute of Religion and its underappreciated impact on American Jewish religious and social life.”
—Tobias Brinkmann, author of Sundays at Sinai: A Jewish Congregation in Chicago