A Place of Our Own: The Rise of Reform Jewish Camping (Judaic Studies Series) (Paperback) 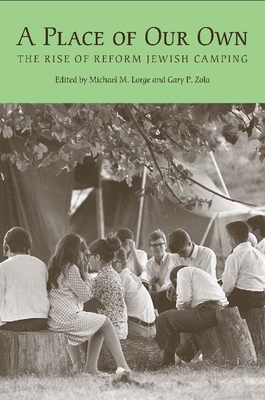 The history of educational summer camps in American Reform Judaism

The history of educational summer camps in American Reform Judaism. Reform Judaism is not the only religious community in America to make the summer camp experience a vital part of a faith community's effort to impart its values and beliefs to its adolescents, but perhaps no group relied more on summer camp as an adjunct to home and community for this purpose. Summer camp became an important part of Reform group identity, a bulwark against the attraction of assimilation into the greater society and mere nominal Judaism.

These essays, which commemorate the fiftieth anniversary of the founding of the first Reform Jewish educational camp in the United States (Olin-Sang-Ruby Union Institute [OSRUI], in Oconomowoc, Wisconsin) cover a wide range of topics related to both the Reform Judaism movement and the development of the Reform Jewish camping system in the United States. Donald M. Splansky’s chapter on “Prayer at Reform Jewish Camps” documents changes in prayer services that took place both at OSRUI and in the Reform movement in general; Michael Zeldin’s “Making the Magic in Reform Jewish Summer Camps” describes the educational philosophies employed at many camps and analyzes their effectiveness; and Jonathan D. Sarna’s “The Crucial Decade in Jewish

Michael M. Lorge is an attorney with Laser, Pokorny, Schwartz, Friedman & Economos in Chicago, Illinois. He is a member of the national board of the Union for Reform Judaism and a vice-chair of its national camping commission. He has lectured and written extensively on both legal and Jewish issues. Gary P. Zola is Executive Director of the Jacob Rader Marcus Center of the American Jewish Archives and Associate Professor of the American Jewish Experience at Hebrew Union College-Jewish Institute of Religion.

“The book is a history featuring twists, turns, asides, footnotes, and cool trivia, like the fact that the first know Jewish camp was, of all things, a girl's camp, founded in 1893 by the Jewish Working Girls Vacation Society, located in New York.”
—Ohio Jewish Chronicle

“This book makes a significant contribution to understanding a major development in American Reform Judaism and the use of organized camping for children and youth as a valuable educational tool.”
—Burton I. Cohen, author of Case Studies in Jewish School ManagementCamping explains how social, political, and cultural conditions paved the way for the Reform camping movement.


“A Place of Our Own [offers] us a rare and detailed glimpse into a world that has a great deal to teach institutional Judaism today.”
—Erica Brown, the director for adult education at the Partnership for Jewish Life and Learning and the scholar-in-residence for the Jewish Federation of Greater Washington, in the journal American Jewish History


“The occasion for this collection is the celebration of the fiftieth anniversary of the founding of Olin-Sang-Ruby Union Institute (OSRUI) for Reform Judaism in Oconomowoc, Wisconsin. Each of the essays contributes to the larger goal of explaining why OSRUI is worth studying and what it reveals. While former campers and camp leaders will undoubtedly find memories stirred by the essays and reminiscences in this volume, its value transcends in-group celebration and nostalgia. Taken as a whole these essays provide a valuable model for analyzing a movement and at the same time offer a powerful argument for the transformative impact of OSRUI on Reform Judaism....If you ever spent part of your summer in Oconomowoc, you will want to read this volume to rekindle memories of some of the people and activities of your youth. But for anyone else, this book is much more than a walk down Memory Lane, for its overarching purpose is to explore how camping can transform a faith community.”
—Shofar: An Interdisciplinary Journal of Jewish Studies