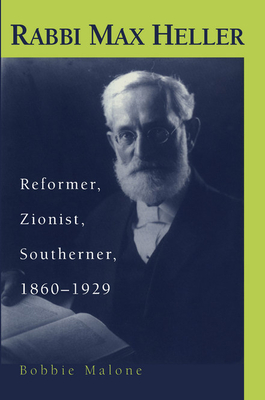 This biography of a pioneering Zionist and leader of American Reform Judaism adds significantly to our understanding of American and southern Jewish history.

Max Heller was a man of both passionate conviction and inner contradiction. He sought to be at the center of current affairs, not as a spokesperson of centrist opinion, but as an agitator or mediator, constantly struggling to find an acceptable path as he confronted the major issues of the day--racism and Jewish emancipation in eastern Europe, nationalism and nativism, immigration and assimilation. Heller's life experience provides a distinct vantage point from which to view the complexity of race relations in New Orleans and the South and the confluence of cultures that molded his development as a leader. A Bohemian immigrant and one of the first U.S.-trained rabbis, Max Heller served for 40 years as spiritual leader of a Reform Jewish congregation in New Orleans--at that time the largest city in the South. Far more than a congregational rabbi, Heller assumed an activist role in local affairs, Reform Judaism, and the Zionist movement, maintaining positions often unpopular with his neighbors, congregants, and colleagues. His deep concern for social justice led him to question two basic assumptions that characterized his larger social milieu--segregation and Jewish assimilation.

Heller, a consummate Progressive with clear vision and ideas substantially ahead of their time, led his congregation, his community, Reform Jewish colleagues, and Zionist sympathizers in a difficult era.

Bobbie Malone is Director of the Office of School Services at the State Historical Society of Wisconsin.

"This biography of Max Heller, Rabbi to Temple Sinai in New Orleans, is superbly written and based on thorough research. Heller, a leading New Orleans religious leader and a Progressive in the early years of the 20th century, with members of his synagogue, is to a large degree responsible for the city's failure to tolerate or play a part in the waves of anti-Semitism that emerged in the U.S. before and after World War I. That Malone is a knowledgeable Judaic scholar is evident throughout this volume. It represents another major addition to the history of Jews in the United States and the South."—Bennett H. Wall, University of Georgia

“ Bobbie Malone’s book is a good read, particularly for those interested in the history of the Jewish experience in the South. The book provides a particularly perceptive view of southern Jewish response to major issues of Jewish concern. In this way, the honesty of her writing gives an entirely different view of American Jewish life.”
—Journal of Southern History

“ Rabbi Max Heller is a much needed book on the social and historical elements of Judaism existing during the turn of the century, in the United States and the South. The biography incorporates enormous amounts of information as it follows the life of Heller from a youngster in Prague to his death in New Orleans. The book is an excellent source of information and [it] helps to fill the gap in books about New Orleans Jews and the Jewish community.”
—LLA Bulletin