Flannery O'Connor: A Girl Who Knew Her Own Mind (Hardcover) 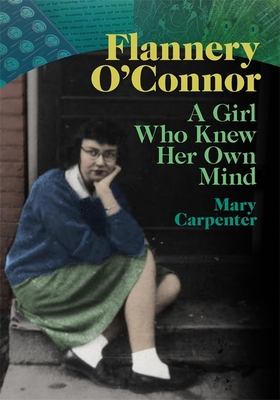 In her biography of writer Flannery O'Connor (1925-1964, n e Mary Flannery), Mary Carpenter introduces young readers to one of the most renowned American authors. With an accessible style of writing, Flannery O'Connor gives younger readers an overview of O'Connor's life and examines the influences, such as her family, region, and education, that helped her become one of the most respected fiction writers of the twentieth century. In a frank but age-appropriate manner, Carpenter discusses the writer's rural southern upbringing, her relationship to race, her chronic lupus, and her Catholic faith. The book will appeal to younger (nine- to ten-year-old) readers with sophisticated interests along with, and maybe more importantly, those older middle-school students who are not yet skillful readers and who thus often search with difficulty for interesting topics presented in books of a shorter length than most written for that age group.

Mary Flannery's life is inspirational. Her childhood in Savannah, Georgia, was both difficult and privileged. During the Great Depression, her father had to leave home to find work and then became very ill. Later in small-town Milledgeville, Georgia, Flannery lived with her mother and an extended family of strong women. Flannery's ability to know her mind at an early age helped her build an artistic reputation starting in high school. Through her fiction, she went on to become a role model for unconventional girls everywhere and for anyone who dreams of becoming a writer.