Go in Peace: A Gift of Enduring Love (Paperback) 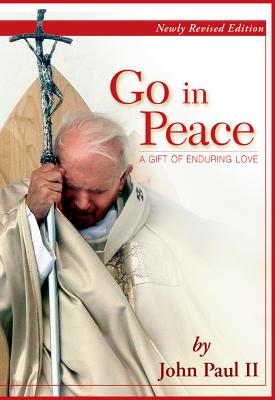 The best-selling collection of the beloved pope's most personal thoughts and writings--revised and expanded This definitive compilation brings together the words that Pope John Paul II most urgently wanted the world to hear and embrace. Arranged by the themes he emphasized in his quarter century as pope--including prayer, forgiveness, family, suffering, the church, and Christ--"Go in P"eace gives the reader an up-close and personal look at this great churchman's pastoral heart and passes along his vision for a vital life of Christian faith."Make time for study, meditation, and reflection. Use your intelligence well; make an effort to reach correct convictions; do not waste time; deepen the motives and foundations of faith in Christ and in the Church, so as to be firm now and in your future. We remain firm in our faith by means of prayer; remember St. Paul wrote: 'Pray without ceasing.'"
--John Paul II, from "Go in Peace.

Born Karol Wojtyla on May 18, 1920 in Wadowice, Poland, John Paul II lived through Nazi occupation during World War II, was ordained to the priesthood in 1946, and was appointed Archbishop of Krakow by Pope Paul VI.On October 16, 1978, he ascended to the papacy and adopted the name John Paul II. Since that time, he has greeted an estimated 16 million pilgrims at the Vatican's General Audiences on Wednesdays and has touched millions of lives in his religious ceremonies, special audiences, and trips throughout the world.