The Echo of Our Song: Chants and Poems of the Hawaiians (Hardcover) 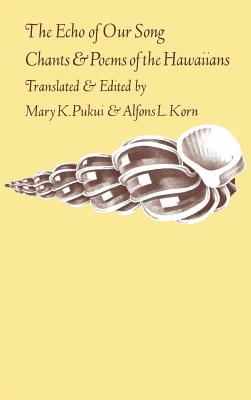 Haina ia mai ana ka puana. This familiar refrain, sometimes translated Let the echo of our song be heard, appears among the closing lines in many nineteenth-century chants and poems. From earliest times, the chanting of poetry served the Hawaiians as a form of ritual celebration of the things they cherished--the beauty of their islands, the abundance of wild creatures that inhabited their sea and air, the majesty of their rulers, and the prowess of their gods. Commoners as well as highborn chiefs and poet-priests shared in the creation of the chants. These haku mele, or composers, the commoners especially, wove living threads from their own histoic circumstances and everyday experiences into the ongoing oral tradition, as handed down from expert to pupil, or from elder to descendant, generation after generation.

This anthology embraces a wide variety of compositions: it ranges from song-poems of the Pele and Hiiaka cycle and the pre-Christian Shark Hula for Ka-lani-opuu to postmissionary chants and gospel hymns. These later selections date from the reign of Ka-mehameha III (1825-1854) to that of Queen Liliu-o-ka-lani (1891-1893) and comprise the major portion of the book. They include, along with heroic chants celebrating nineteenth-century Hawaiian monarchs, a number of works composed by commoners for commoners, such as Bill the Ice Skater, Mr. Thurston's Water-Drinking Brigade, and The Song of the Chanter Kaehu. Kaehu was a distinguished leper-poet who ended his days at the settlement-hospital on Molokai.