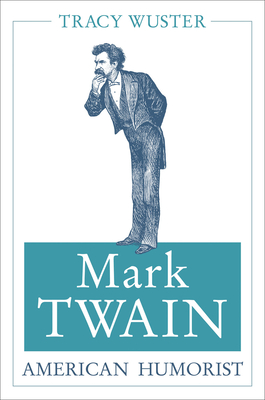 By Tracy Wuster
This item is not available.

Mark Twain, American Humorist examines the ways that Mark Twain’s reputation developed at home and abroad in the period between 1865 and 1882, years in which he went from a regional humorist to national and international fame. In the late 1860s, Mark Twain became the exemplar of a school of humor that was thought to be uniquely American. As he moved into more respectable venues in the 1870s, especially through the promotion of William Dean Howells in the Atlantic Monthly, Mark Twain muddied the hierarchical distinctions between class-appropriate leisure and burgeoning forms of mass entertainment, between uplifting humor and debased laughter, and between the literature of high culture and the passing whim of the merely popular.

Tracy Wuster teaches writing to electrical and computer engineers at the University of Texas at Austin. He is the president of the American Humor Studies Association and is the book review editor of its journal, Studies in American Humor. He is the editor of the online humor studies publication Humor in America and the Co-Director of the Humor in America Project at the University of Texas.

“What makes this book a fresh and welcome addition to Mark Twain criticism is its focus on particular aspects of cultural production: periodicals, the lyceum circuit, after-dinner speeches, subscription publishing, and the book mock-ups prepared for the canvassers. Wuster is particularly good at bringing us in close for an inspection of the machinery of cultural judgment in periodicals, reviews of authors and their comic writing, as well as reviews of performance on the lecture circuit.”—James Caron, author of Mark Twain, Unsanctified Newspaper Reporter

“The gift of this book is in presenting a closer look at the social and professional circumstances that shaped Twain’s career.”—Tom Quirk, Mark Twain and His Circle series editor

“The author recognizes three stages in Twain’s identity as a humorist: his California days as a newspaper reporter, his association with the national humorists, and the tension between widespread popularity and ‘the possibility of literary respectability.’”—American Literature

“Wuster is less interested in the meaning of Mark Twain’s literary texts than in the development of his reputation from roughly 1865 to 1882, as he transformed himself from an edgy California humorist into a regular contributor to the eminently respectable Atlantic Monthly.”—Studies in American Humor

“By the time the third stage of Mark Twain's rising literary stature is complete, it is no longer shifting between the popular and the respectable, between buffoonery and the serious, and Mark Twain enters a fourth and final stage in which he becomes the standard by which other humorists will be measured, and sets the course for what American humor would become. Wuster succeeds in sorting out the complex contexts that brought Mark Twain to that place in American culture.”—Mark Twain Forum

“Wuster’s book explores a variety of topics and makes novel contributions to the study of Twain, American humor, and periodicals.”—American Periodicals

“The image of Mark Twain arrayed in a white suit, sporting a wild shock of white hair, and emitting wisdom and wit with puffs of smoke is so iconic that the younger Twain in early photographs is often unrecognizable. A comparable challenge confronts anyone attempting to understand Twain’s career, for, as Wuster argues, many studies of Twain are not grounded in the cultural context of Twain’s emergence into the literary world. Wuster offers a detailed re-creation of these contexts as he analyzes the evolving status of American humor, grants order to the progression of Twain’s early career, and delivers nuanced readings of key moments that formed Twain’s literary reputation.”—Arkansas Review

“Evaluates Twain’s humor as having its own unique and lasting values apart from its consideration as ‘serious’ literature.”—Journal of American Culture

“A book where the scholarship runs deep, where the prose is unfailingly clear, poised, modest, and engaging, and where the findings are of real consequence to the study of Mark Twain, of  American wit and humor, and of our literary and cultural history.”—Mark Twain Annual

“Among Wuster’s most significant contributions is his reminding us that Twain reputation as a serious literary artist—the Mark Twain, in other words, that many readers revere today—really did not emerge until the 1880s. Mark Twain: American Humorist is a meritorious piece of scholarship and takes its place among the two or three most important studies of Mark Twain and humor to have appeared in the last fifty years.”—Mark Twain Journal