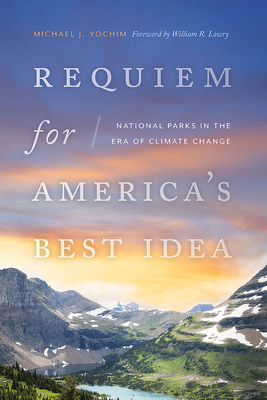 In his enthusiastic explorations and fervent writing, Michael J. Yochim "was to Yellowstone what Muir was to Yosemite. . . . Other times, his writing is like that of Edward Abbey, full of passion for the natural world and anger at those who are abusing it," writes foreword contributor William R. Lowry. In 2013 Yochim was diagnosed with ALS (Lou Gehrig's disease). While fighting the disease, he wrote Requiem for America's Best Idea. The book establishes a unique parallel between Yochim's personal struggle with a terminal illness and the impact climate change is having on the national parks--the treasured wilderness that he loved and to which he dedicated his life.

Yochim explains how climate change is already impacting the vegetation, wildlife, and the natural conditions in Olympic, Grand Canyon, Glacier, Yellowstone, and Yosemite National Parks. A poignant and thought-provoking work, Requiem for America's Best Idea investigates the interactions between people and nature and the world that can inspire and destroy them.