Small Wonder: The Amazing Story of the Volkswagen Beetle (Paperback) 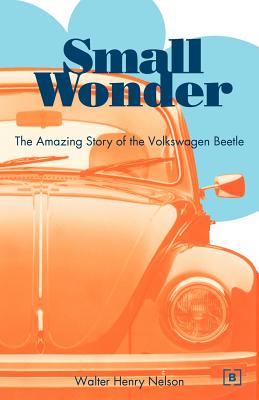 A highly-detailed account of the development and subsequent success of the Beetle, including much behind-the-scenes information. Originally published in 1970, Small Wonder focuses on the history of Volkswagen from its inception to 1970. With this edition, the author wrote a new introduction which helps the reader to understand the relevance of the book to our times, in light of the release of the New Beetle. Also new to this edition are expanded appendices including retail information for all Volkswagen models through 1997 and an updated how-to-tell-the age of your Beetle chart.Over 1.2 million paperback copies were sold when originally released, making Small Wonder the most successful Beetle book of all time. Often quoted as a reference source by subsequent histories, Small Wonder provided valuable insights and inside information gleaned from years of research within Volkswagen. Not only is the history of Volkswagen portrayed, but also that of the personalities that helped shape the direction of the company and of the Beetle itself.Features: * At the time of writing, the author had full access to Volkswagen archives in Germany and the U.S.* Detailed profile of Heinz Nordhoff, the man most responsible for the worldwide success of Volkswagen in the '50s, '60s, and '70s* The complete story of how the Beetle overtook the U.S. market* How advertising played a role, including the behind-the-scenes story of VW's ad agency at the time, DDB (Doyle Dane Bernbach) and their classic "Think Small" campaign* New section on "How to identify the year of a Beetle," and a detailed look at the assembly process.