Fashion: A Timeline in Photographs: 1850 to Today (Hardcover) 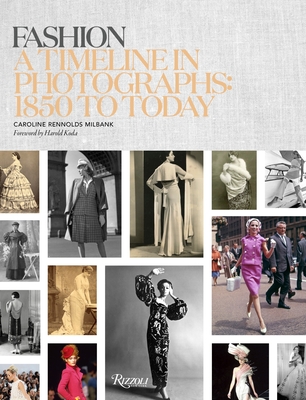 FASHION: A Timeline in Photographs is a definitive and beautifully illustrated visual history of fashion from one of America’s premiere fashion historians, Caroline Rennolds Milbank. This unrivaled and exceptional fashion resource is an immersive 150-year visual odyssey which tracks year-by-year, decade-by-decade, the ever-changing fashion landscape from 1850 to the present. With over 1400 photographs, almost all of which are rare—either never before published or rarely seen—we see fashion transform from the crinoline-supported billowing skirts and enormous ballooning sleeves of the late 19th century to the hemlines that fell along with the crashing stock market in 1929; through the shocking pants styles of the '30s and short A-line shifts of the '60s; through the designer-driven styles of the '80s, '90s, and today. In her introduction, Milbank explains the importance of photographs in that they “show what fashion illustrations cannot; what people actually wore, what exaggeration they adopted and the actual prevalence of style.”

As the book travels primarily through North America and Europe, presenting multiple images for each year, Milbank keenly illustrates how a certain style of dressing was ubiquitous--the same silhouette worn not only in France and the U.S. but also in India and Hungary. Along with tracking every major change in fashion, readers also see evolutions in hairstyles, jewelry, hat styles, outerwear, and footwear. The photographers range from the earliest well-known professionals like Disdéri, to charming amateur works as well as to the very beginning of street photography. Photographs of stylish women seen out and about span over 100 years, with recent examples from Mary Hilliard and Scott Schuman. FASHION: A Timeline in Photographs will be a welcome addition to the library of any fashion or costume designer as well as students of fashion, history, art history and photography, and is sure to become an instant classic!

"Over the past decade, street style has become so ubiquitous it's nearly lost all meaning. Fashion: A Timeline in Photographs brings a fresh perspective to the phenomenon. With a scrapbook feel, it exhibits style through candid pictures taken from the 19th century to present - the most notable dating to a time before digital cameras and the Internet. its deliberate elimination of calculated camerawork captures a true depiction of how people dress."
-SURFACE MAGAZINE

"Caroline Rennolds Milbank has taken on the herculean and seemingly impossible task of chronicling fashion year by year via images that span over a century—all accompanied by very brief but enlightening text. What this feat of perseverance accomplishes is that it provides amazing details of fashion that might have previously gone unnoticed for many readers. Without question this is a book to be read, pored over, and read again if you wish to really absorb all that is included. There is an almost unending amount of information here the likes of which this reviewer has never come upon. . . this is a must for those who are obsessed with the progression of fashion as well as those who are in need of a text dedicated to how fashion has evolved since 1850."
-NEW YORK JOURNAL OF BOOKS

"FASHION A Timeline in Photographs:1850 to Today is a cunning combination of the scholarly-and the blur that Fashion persists in running along. . . The book's laser focus on fashion since just before the Civil War until today, illustrates each year's fashion "moment" with photographs and commentary. Harold Koda writes the foreword, solidifying the book's importance as to how we look at & in fashion. Milbank's culling of photographs-which must have been thousands and thousands, or more, is quite brilliant. This book is a heavenly marriage of fashion and photography, and we are immersed, and we are seduced, blissfully drowning in its beauty and weight."
-LITTLE AUGURY BLOG

“Fashion A Timeline in Photographs: 1850 to Today” is a labour of love by one of the most reliable and informed fashion scholars in the United States, Caroline Rennolds Milbank. . .  Costume designers, fashion designers, stylists and editors will find this book as invaluable as the general reader will find it engrossing."
-THE BUSINESS OF FASHION