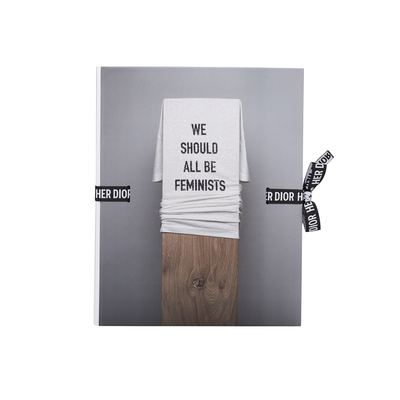 A powerful collection of photographs and essays by trailblazing women that celebrates Maria Grazia Chiuri's feminine and feminist spirit within the House of Dior.

Since being appointed the first female creative director of Dior in 2016, Maria Grazia Chiuri has infused the illustrious fashion brand with a strong current of femi-nism. Her approach is at once refreshing and needed, while still paying homage to the avant-garde ethos that has been at the heart of the house since its founding by Christian Dior in 1947.
This beautifully produced volume presents 160 images by leading female photographers such as Nan Goldin, Sarah Moon, Brigitte Niedermair, Coco Capitán, Vanina Sorrenti, Julia Hetta, Katerina Jebb, Zoë Ghertner, and Bettina Rheims. The women creators featured among these pages represent the breadth of style and diversity upheld by the Maison Dior. Thought-provoking quotes and poems from inspirational women--Chimamanda Ngozi Adichie, Linda Nochlin, Claire Fontaine, Judy Chicago, and Tomaso Binga, to name a few--accompany the striking photographs. Showcasing Chiuri's haute couture and ready-to-wear collections from 2017 to 2021, Her Dior captures the creative director's innovations at the house--where, for the past five years, she's reclaimed the narrative creating Dior fashions for women, by women.

"Women Seeing Women: Since taking over as artistic director of women’s collections at Dior in 2016, Maria Grazia Chiuri has made it a rule to work with female photographers. The resulting images are sampled in “Her Dior: Maria Grazia Chiuri’s New Voice,” a book from Rizzoli New York that celebrates the female gaze." — WOMEN'S WEAR DAILY

"'The book represents the kaleidoscope of voices and visions that the house of Dior embodies today,' says Maria Grazia Chiuri of Her Dior, published by Rizzoli and out now. This 'living project,' as she describes it, brings together 160 images by groundbreaking women image-makers from around the world who have interpreted Chiuri’s work at Dior and represent a 'multitude of ideas on femininity.' While, as Chiuri notes, 'many voices are expressed' in the volume—among them Nan Goldin, Sarah Moon, Coco Capitán, Katerina Jebb, Zoë Ghertner, Sarah Waiswa, Kristin-Lee Moolman, Jodi Bieber and Bettina Rheims—'there are many more ways of understanding, apprehending and living one’s femininity… the naturalness of this conversation is important, [its] point of view is both intimate and open, free of judgment and paternalism.'" —VOGUE

"-- Comprised of 160 photos by the likes of Nan Goldin, Sarah Moon, Vanina Sorrenti, Zoë Ghertner, and Bettina Rheims, as well as inspirational poems and quotes from a group including Chimamanda Ngozi Adichie and Judy Chicago, this tome pays homage to Maria Grazia Chiuri's tenure as creative director at Dior and also the famed house's long and storied history. A must for any fashion lover's bookshelf." —TOWN AND COUNTRY