10,000 Ways to Die: A Director's Take on the Italian Western (Paperback) 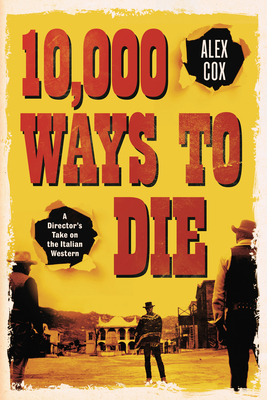 "Forty years ago as a graduate student I wrote a book about Spaghetti Westerns, called 10,000 Ways to Die. It's an embarrassing tome: full of half-assed semiotics and other attenuated academic nonsense. Thirty years later I wrote an entirely new book with the same title, about the same subject, from a different perspective—that of a working film director. What interested me was what the filmmakers intended, how they did that shot, how the director felt when his film was recut by the distributor, and he was creatively and financially screwed. Now I have prepared a new edition of the 10,000 Ways to Die. It reflects my changing thoughts about the Italian Western, which I still greatly admire. It includes corrections, additions, and new sections on films I changed my mind about, or hadn't seen—including Lina Wertmuller's Belle Star—the only Italian Western directed by a woman." —Alex Cox

"Great on influence and anecdotes, with plenty to chew on for spag-buffs." —Empire Magazine

"Enlivened with humor, vivid descriptions, and an infectious enthusiasm, this book is an informative take on an offbeat, short-lived genre." —Library Journal

"Rigorous in thought yet unruly in spirit, it's hard to think of a more apt guide to the Italian West." —Total Film