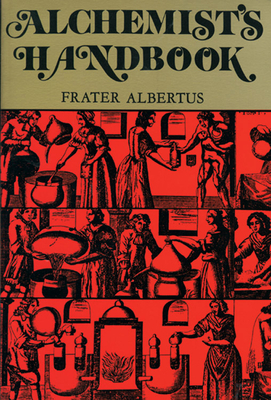 Formerly handed down under oath of secrecy, this clear, concise handbook discusses: the fundamental principles of alchemy; directions for the formation of an inexpensive home laboratory, with illustrations of the necessary equipment; stepbystep instructions for the work of the Lesser Circulation, the alchemical transformation within the plant kingdomthe necessary prerequisite for any work in the mineral kingdom.

Frater Albertus Spagyricus (Dr. Albert Richard Riedel) (1911-1984); founder of the Paracelsus Research Society in Salt Lake City, which later evolved into the Paracelsus College. Based on the Paracelsian concept of three essentials, Body, Soul and Spirit, Frater Albertus developed a system of teaching alchemical concepts using the spagyric technique of separation and cohobation. The unique gradated courses allowed students to explore aspects of the vegetable, mineral and animal kingdoms in an understandable and accessible way. Previous to this, one had to be a member of a fraternity or secret society in order to gain access to structured teaching. After his death in 1984, the college ceased operations in the United States but continued to carry on the tradition in Australia. Frater Albertus had a profound effect on the way Alchemy and particularly the Spagyric method was disseminated and understood in the mid to late 20th century. His works were translated into many languages.