Job with Room and Board (Paperback) 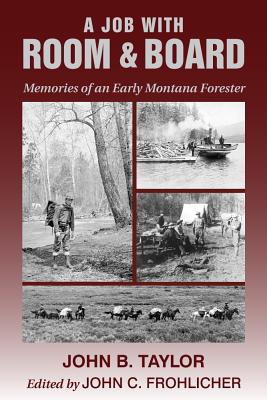 In 1907 at the age of eighteen, John B. Taylor took a summer job with the US Forest Service�mapping the wilderness and cruising the timber in the as-yet-unroaded Swan Valley in Montana. The job came with room and board�over a million acres of room and plenty of grouse to supplement the salted pork and hard crackers they brought with them. During the school year in his hometown of Missoula, he studied classics at the university, but after witnessing the brutal exploitation of timber along the Blackfoot River, he decided that �live trees beat dead languages.� He headed to the University of Michigan School of Forestry and obtained degrees in botany and forestry. After a stint in the US Army in World War I, he worked his way up through the Forest Service ranks, serving as ranger, range examiner, timberman, forest supervisor, and assistant regional forester in charge of personnel. His colorful stories portray life during the early days of the Forest Service, when travel was by horse and rangers carried guns. His day-to-day jobs included fighting fires, rounding up wild horses, disposing of moonshine stills on national forest land near Butte during Prohibition, and hiring down-and-out men for the CCC during the Depression.
Taylor recorded his memories in the late 1960s, and family friend and author John C. Frohlicher transcribed the tapes and edited the manuscript. Says Frohlicher, �Too many men who spent their lives taming the wilderness are remembered only by a name on a little western creek.� Through these stories, John B. Taylor, 1889�1975, will be remembered for much, much more.