The Inner Impulses of Evolution: The Mexican Mysteries and the Knights Templar (Cw 171) (Paperback) 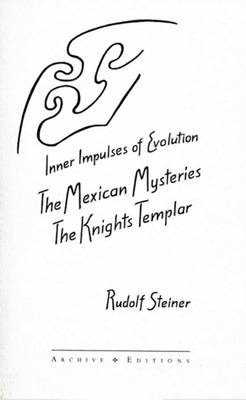 From the foreword by Steward C. Easton:

In these lectures Rudolf Steiner provides some historical material that not only cannot be confirmed--like the prehistorical material given in Occult Science and elsewhere--but appears to be even contrary to what is available to conventional archaeologists and historians. In particular, there are two major areas where at first sight Steiner would seem to have been in error, and there appear also to be some errors in detail about the characteristics of some Mexican deities cited by name. It is certain therefore that critics of Rudolf Steiner will cite these anomalies and label them errors, in the process attempting to discredit the kind of spiritual investigation engaged in by him. To the best of my knowledge--which is admittedly not complete--in no other lectures given by Steiner at any time are there any comparable divergences from accepted historical fact. With regard to the other material taken from the Akasha Chronicle it must be said that much of it is startling and of very great interest. But this is impossible to check or confirm from the historical and archaeological material available to us, but there is also nothing in the historical record that can be said to refute it.

In view of the fact that these lectures have long been available in German, and some use has been made of them in English language publications such as Carl Stegman's The Other America, it seems necessary now to come to grips with these apparent anomalies or errors. Rudolf Steiner gives the name of Vitzlipochtli to a great initiate of the white path who succeeds in having a powerful black magician crucified at the same period of time when Christ Jesus was crucified on the Hill of Golgotha. This name, as it was transcribed in 1916 in Dornach where the lectures were given, is so close to that of the evil god of the Aztecs some 1,300 years later that the two names must be regarded as the same. This evil god (Uitzlipochtli or Huitzlipochtli) required human sacrifices, which were accompanied by the tearing out of the hearts of the victims. Steiner gives a different name to the evil god and says nothing here of the heart, but insists that it was torn out; and he even adds that this continued to be true in the time of the Spanish Conquest at the beginning of the 16th century A.D., for which also all evidence of any kinds is lacking.

It is by no means impossible that all Steiner's statements are perfectly correct, but that evidence is unavailable because of the maintenance of absolute secrecy in such dreadful mystery rites as these. It is also more than possible that a bellicose conquering people changed, over the period of some thirteen centuries, the image of their god man of the period of the Mystery of Golgotha into an evil god of war. In addition, over the same period the tearing out of the stomach (the seat of the will) could have become the tearing out of the heart (the seat of the feeling). It is not necessary for us to be able to prove or confirm what Steiner tells us from the Akasha Chronicle, but it does seem worthwhile trying to show that what he says is not inconsistent with, and not contrary to what is revealed by the very sparse surviving records, literary archeological--and it is entirely fair to stress the many centuries that elapsed between the events referred to by Steiner and the Spanish Conquest when most of the information was assembled by Spanish investigators, who obtained it by questioning the Aztecs of that period.

It was therefore decided to ask Fr d ric C. Kozlik, docteur- s-lettres, an anthroposophist who is familiar with the Mexican historical and archeological material, to write an introduction for these two lectures, mentioning such evidence as he has been able to assemble that may be considered to support Steiner's statements, particularly those that appear to be contrary to what is officially accepted as history, and presenting such arguments as seemed fitting to him to show why it is quite possible even for an erudite scholar to accept what Steiner says in preference to going along with the official history, so often called by Steiner a fable convenue. It may be noted that in an article written subsequent to this introduction Dr. Kozlik suggests that two different rites existed in Mexico, one involving the excision of the heart and the other of the stomach. His article was published in #11 of the Goetheanum News, March 11, 1984.

The introduction which follows was translated by me from his rather dense and packed French that I have in places, with his approval and collaboration, simplified and even paraphrased to make it, as we hope, more readily comprehensible by a non-specialist readership. Dr. Kozlik wishes to make it clear that he is not trying to prove anything that Dr. Steiner said, but only to offer hypotheses consistent both with the evidence and with Steiner's revelations. It will be for the readers themselves to determine how far they are willing to go along with him on the basis of what he has presented.

This book is a translation of Innere Entwicklungsimpulse der Menschheit (Vol. 171 in the Bibliographic Survey, 1961).