Ten Acrobats In An Amazing Leap Of Faith (Paperback) 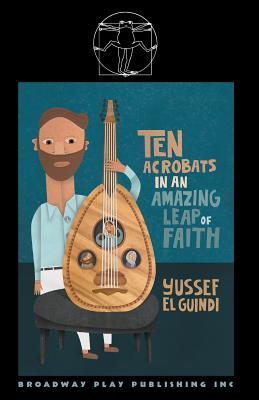 "What if Neil Simon wrote a lovable comedy about a Muslim-American family trying to hold itself together amidst the misunderstandings that run amuck and the comedy that ensues when the generations collide? It would probably resemble something like the surprisingly enjoyable, charming and oftentimes hilarious TEN ACROBATS IN AN AMAZING LEAP OF FAITH."
Fabrizio O Almeida, New City Chicago

"With TEN ACROBATS IN AN AMAZING LEAP OF FAITH, playwright Yussef El Guindi takes the genre (of the immigrant experience) to a new place--the Arab-American experience post September 11, 2001. With humor, passion and a lovely touch of whimsy, he's created a theatrical experience that's not to be missed."
Louis Weisberg, CFP

"Woven into this complicated family drama are scenes of delightful humor. Humanity is the substance that ties not only all of the characters together but also binds the audience to them. This play beautifully serves the purposes of drama, comedy, the artistic theatrical process and, perhaps most importantly, demystifying the hate that comes from fear of unknown cultures."
Venus Zarris, Gay Chicago Magazine

"The drama comes from an emotionally vivid story that captures a world of anger, joy, love and frustration as it plays out in a Muslim-American family. The appeal lies in Guindi's ability to transcend ethnicity while still writing a rich depiction of a Muslim family... The emotional difficulties could belong to any family of any (or no) religion... Smart, challenging, poignant, whimsical and at times, delightfully silly."
Catey Sullivan, Pioneer Press