Heroes of the Acadian Resistance: The Story of Joseph Beausoleil Broussard and Pierre II Surette 1702-1765 (Paperback) 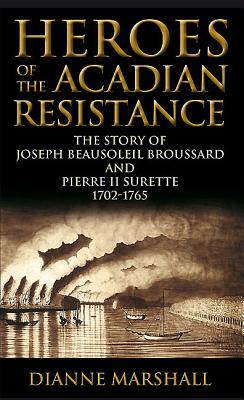 Heroes of the Acadian Resistance tells the unique and little-known story of the young men who led an Acadian resistance in 18th century Nova Scotia. They fought valiantly in a guerilla campaign against the British to save their homes and families from destruction and deportation.

Their battle was against a form of ethnic cleansing that saw British soldiers burn every remnant of the Acadian community -- homes, barns and churches. All Acadians who the soldiers were able to round up were forcibly deported.

The French government used missionary priests as government agents to generate resistance amongst Mi'kmaq and Acadian Catholics in an attempt to regain Nova Scotia from British domination. Their efforts were welcomed by some Acadians who had their own reasons for resisting British rule. The guerilla campaign which ensued was well underway before the deportation, and continued after the majority of Acadians had been captured and forcibly exiled.

Heroes of the Acadian Resistance tells the story of that resistance and two young Acadians who proved to be leaders in these battles -- Joseph Beausoleil Broussard and Pierre II Surette. Beausoleil, who like many fellow Acadians ended up in Louisiana, is remembered in the Cajun community as a great Acadian hero. Surette lived out his days in Yarmouth County in Nova Scotia, an area which is still home to many of Surette's descendants.

This book offers a fresh perspective on the tragic events of the Acadian expulsion from 18th century Nova Scotia.

DIANNE MARSHALL, a native of Halifax, is a frequent contributor on local history and folklore to Halifax's Sunday Chronicle Herald newspaper. Listeners to CBC's Information Morning will know her as the "history buff." She is also the author of Georges Island: The Keep of Halifax Harbour.