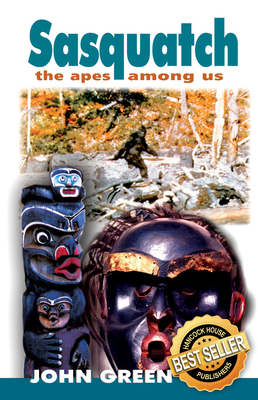 The bible of Sasquatch/Bigfoot, reprinted in it's original form. With the explosion of knowledge taking place in recent decades, scientists are constantly discovering that things they have been certain about are wrong: the continents they thought had been in place forever actually drift around; the cells we are made of are not simple but infinitely complex; our genus has been on Earth many times longer than they thought. And increasingly there is compelling evidence that scientists are wrong about our living relatives. One thing considered certain was that the giants and wildmen in stories from all over the world are entirely imaginary. Now that belief is under serious challenge. Forty-five years ago giant footprints found in northern California brought Bigfoot to the attention of Americans and revived interest in Canada's Sasquatch. Every year since then additional evidence has accumulated, and now that witnesses can submit information via the internet the trickle of reports has become a flood. John Green has been in the thick of things from the beginning. In Sasquatch, The Apes Among Us, first published in 1978, he sampled the evidence from the earliest records up the late 1970s and from all around the world, then concentrated on two aspects of the subject: the nature of the animal described and the wealth of reports from parts of North America outside the Pacific Northwest. When it came out The Apes Among Us was acclaimed as the definitive work on the fascinating subject of whether humans share North America with a giant bipedal primate that is unknown to science. Since then evidence for the existence of that unknown primate has grown exponentially, and individual scientists have written books about aspects of it. Remarkably, however, to most of the scientific world the evidence remains unknown and unexplored, and for those who do follow the subject this is still the definitive book.

John Green is a graduate of the University of British Columbia and Columbia University Graduate School of Journalism. As a newspaperman for 40 years as well as a leading participant, he is uniquely qualified to be the chronicler of the sasquatch investigation. Between 1968 and 1973 he wrote three short volumes primarily concerned with events on the Pacific Coast, On Track of the Sasquatch, Year of the Sasquatch, and The Sasquatch File, which became standard references in the field. Then in The Apes Among Us he was the first to deal comprehensively with information from areas east of the Rocky Mountains.