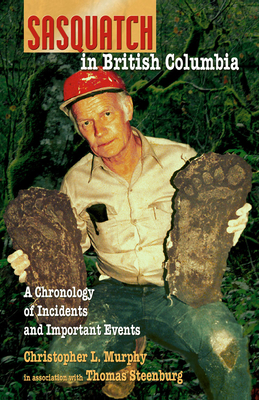 A complete reference on sasquatch in BC, from fossilized footprints and petroglyphs to modern-day sightings and current scientific research. The most comprehensive work on the history of sasquatch in BC, this book includes the earliest fossilized indications of the existence of the creature, every documented sighting and experience, along with complete outlines of research undertaken by both pioneers in the field and modern-day scientists. Historical photos and a 32-page color section. A great reference and also a fascinating read. Early reports in British Columbia were the first to call attention to the possible existence of sasquatch, and such reports have persisted for over two hundred years. This work covers the earliest history of the province to the present day, and draws upon the findings of all major sasquatch researchers in British Columbia and information reported in the press and other media. It also includes important sasquatch-related events that involved BC researchers and their quest to resolve the phenomenon. Several of the great pioneers in the field of sasquatch studies have now passed away. Who they were and their legacy have been provided as both a tribute and a historical reference. This work is intended to be a major reference for the history of the sasquatch in British Columbia. However, it is also a fascinating read for those simply interested in the subject.

Christopher L. Murphy retired in 1994 after 36 years of service with the British Columbia Telephone Company (now Telus). During his career, he authored four books on business processes. After retirement he taught a night school course on vendor quality management at the B.C. Institute of Technology. An avid philatelist, Chris has written several books on Masonic Philately. Chris got involved in the sasquatch mystery when he met Rene Dahinden, who lived nearby, in 1993. He then worked with Rene in producing posters from the Patterson/Gimlin film and marketing sasquatch footprint casts. In 1996, Chris republished Roger Patterson's 1966 book, Do Abominable Snowmen of America Really Exist?, and Fred Beck's book, I Fought the Apemen of Mt. St. Helens. In 1997, Chris published Bigfoot in Ohio: Encounters with the Grassman, a book he authored in association with Joedy Cook and George Clappison of Ohio. In 2000, Chris embarked on a project to assemble a comprehensive pictorial presentation on the sasquatch. This initiative led to his 2004 sasquatch exhibit at the Vancouver (BC) Museum and the publication of Meet the Sasquatch, the first edition of this book. In due course, Chris wrote a supplemental section to Roger Patterson's book, which was republished in 2005 by Hancock House Publishers under the title, The Bigfoot Film Controversy. The following year, Chris updated his Ohio book, again with his two previous associates, and it was published in 2006 by Hancock House under the title, Bigfoot Encounters in Ohio: Quest for the Grassman. Chris's sasquatch exhibit next traveled to the Museum of Mysteries in Seattle, where it was displayed for five months in 2005. In June of the following year, it opened at the Museum of Natural History in Pocatello Idaho, where it was shown for 15 months. Chris has also attended and presented at many sasquatch symposiums, and has taken part in several television documentaries on the subject.